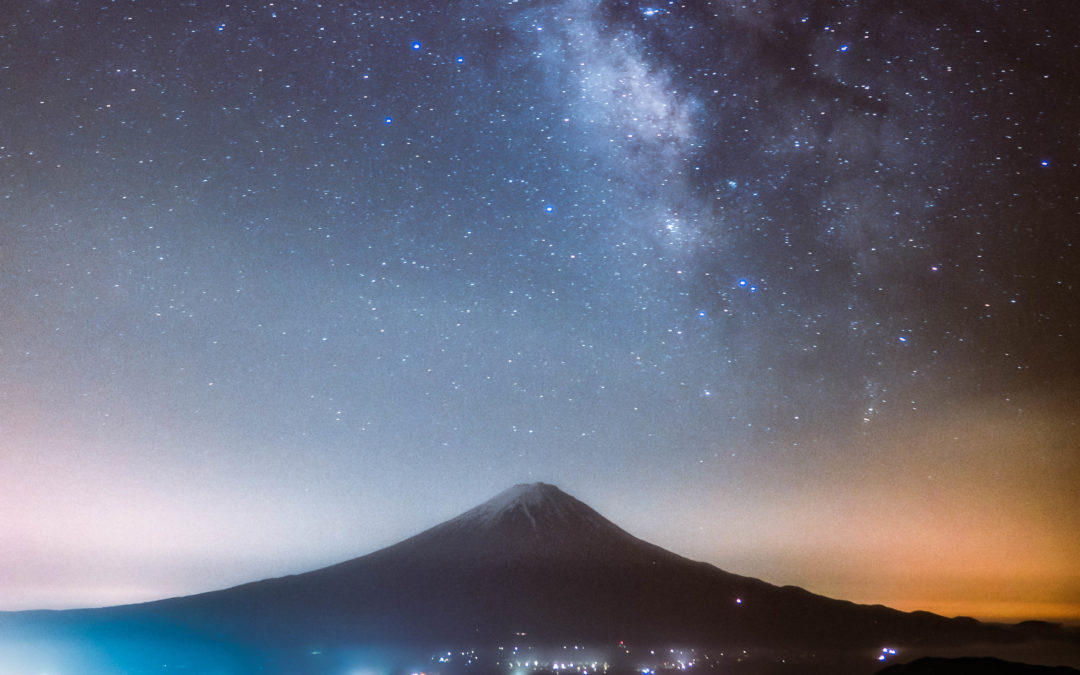 Last month I went on a hike to take photos of the milky way and Mt Fuji at Shindou Pass near Lake Kawaguchiko in Japan. I’d seen some Japanese photographers post shots taken there, but it was surprisingly difficult to find any proper english info. The language barrier was real. Worst of all there was only one day with good weather within the moon cycle, and it was coming up fast, which basically meant that I’d have to do a blind hike in pitch black darkness all by myself as it was too short notice to get anyone to come with me.

I couldn’t find an english speaking friend who had done this hike before, but with this site and the help of google translate I managed to survive. The Japanese name for the place is “新道峠” or phonetically, “Shindou Toge”.

I did the hike for the purpose of shooting the milky way and the sunrise, so it meant hiking in the dark. There is a clear path to follow, but it is absolutely pitch black. I don’t recommend doing this hike alone or if you’re afraid of the dark, because it was creepy as hell. 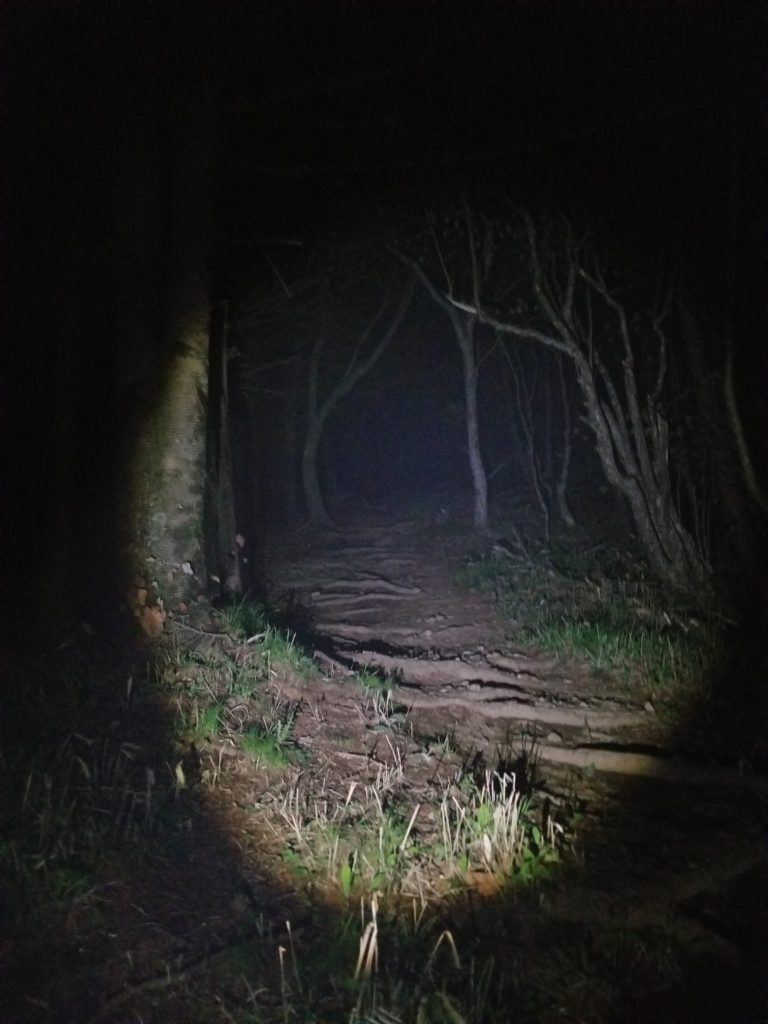 Bring plenty of water and some snacks if you’re going to wait until sunrise. And a spare torch! I stupidly only brought one 750ml bottle of water of which I finished half of during the taxi drive on the way to the beginning of the trail. Don’t be an idiot like me and bring plenty.

But if you know where you’re going, this hike isn’t all that difficult to do. If you take a taxi up to the back of the mountain, it is about 15 minutes up and 2 hours down to the other side of the mountain. I will explain in more detail below. 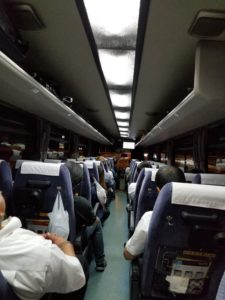 I was staying in Tokyo, so I took a highway bus from Shinjuku Bus Terminal to Lake Kawaguchi station. The journey took about 1.5 hours. I arrived at Lake Kawaguchi at 10pm. There is also the option to take a train or another bus from Shibuya – getting to Kawaguchiko isn’t particularly hard as it is a popular tourist spot.

Taxi to back of the trail

There is a small mountain road all the way to the back of Shindou Toge hiking trail entrance. Its about 45 minutes away from Kawaguchi station. I showed google maps to a taxi driver at the station and said “Shindou Toge”, he had no issues taking me there. Although the closer we got to the mountain the more doubtful the driver got, eventually refusing to drive me all the way to the entrance of the trail as the road got too narrow. There were there warning signs on the road about BEARS which almost made me want to turn around. As the driver dropped me on the road, had a cigarette, and turned around, the atmosphere got real creepy real fast. 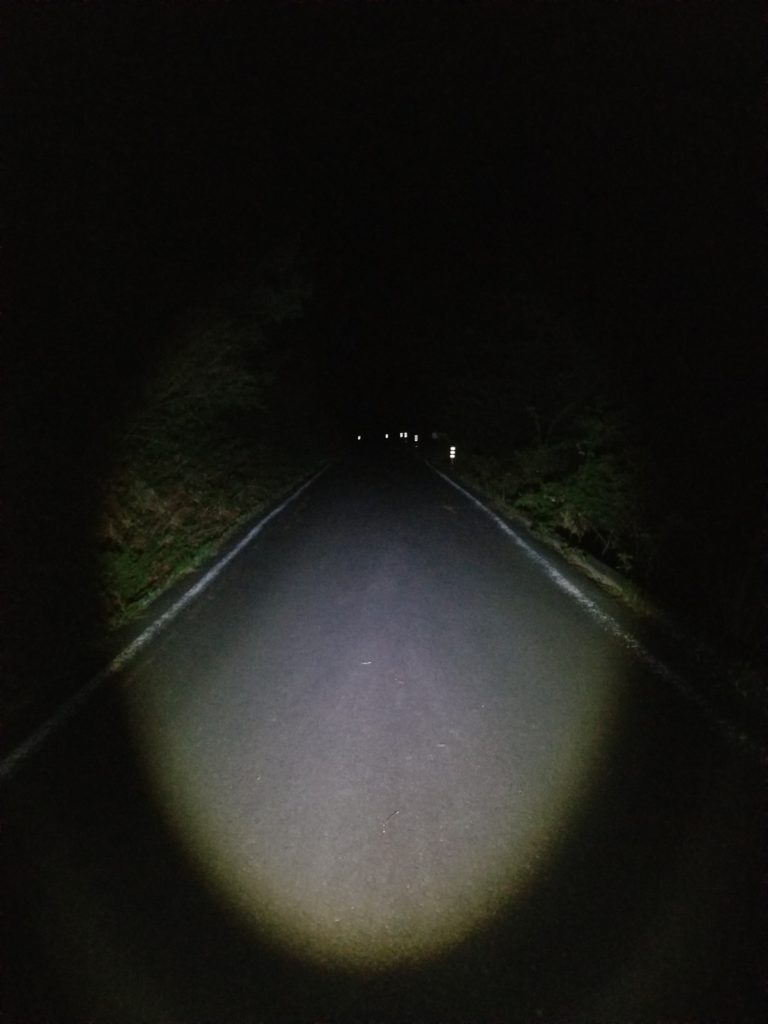 I told myself even the bear must be sleeping and continued on. Well, after the taxi left, it’s not like I had a choice. There wasn’t even any phone signal on the road, and the way back would have been a 20 kilometer walk… And I really didn’t feel good about BEARS. At this point I was fairly scared and wished I’d at least convinced any random person to come with me. Without a flashlight the darkness was so deeper than city folk ever really get to experience. But I marched on for about 20 minutes to reach the start of the Shindo Pass trail. 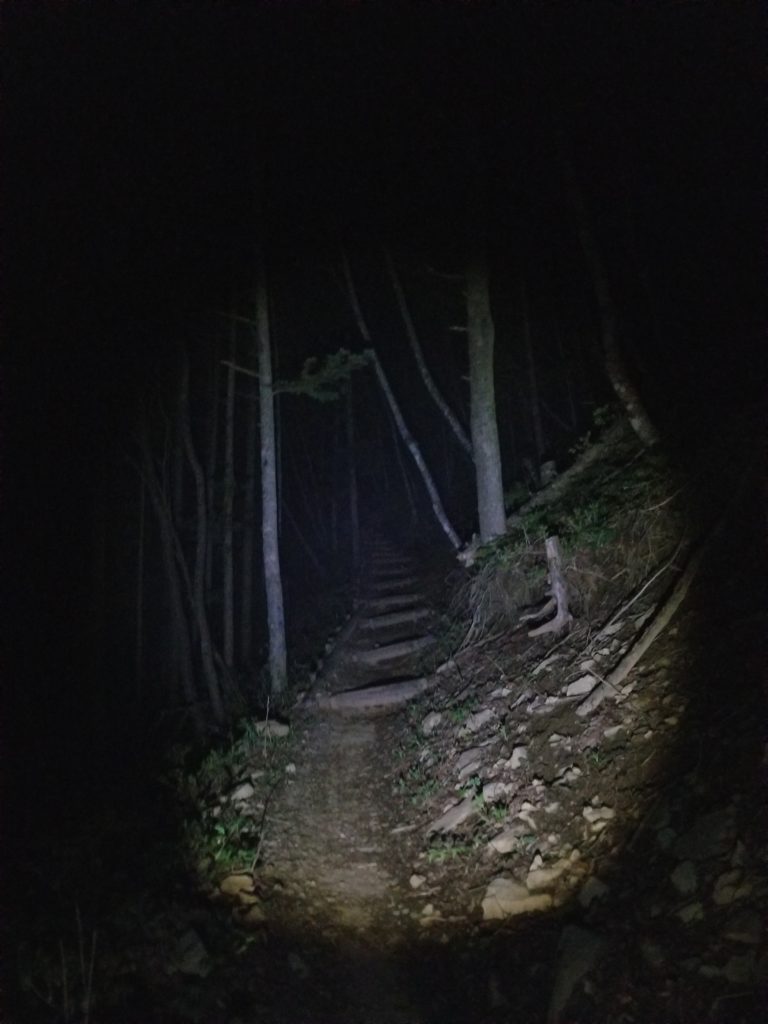 At the end of the mountain road, there is a small parking lot and this trail entrance. Welcome to an even darker, creepier hiking experience! I hope your torch isn’t out of batteries yet.

Luckily there is a fairly clear path, and at this point GPS will be able to tell where to go when faced with cross roads. This is also the point where I got my internet back and was able to text friends for emotional support.

Luckily the only wild animal I encountered was PROBABLY a lost dog of another hiker. But I cant know for sure.

There are 2 viewing platforms that are quite obvious to spot. However I mistakenly thought there were 3, so I wandered around for an extra hour trying to find the 3rd one before returning to the second. At the 2nd platform, there were a bunch of other japanese photographers, which I didn’t mind at all. I waited there until sunrise, and consumed the rest of my water and snacks.

The Milky Way was gorgeous, it aligned with the mountain at around 2am but the best visibility was around 3.15am. 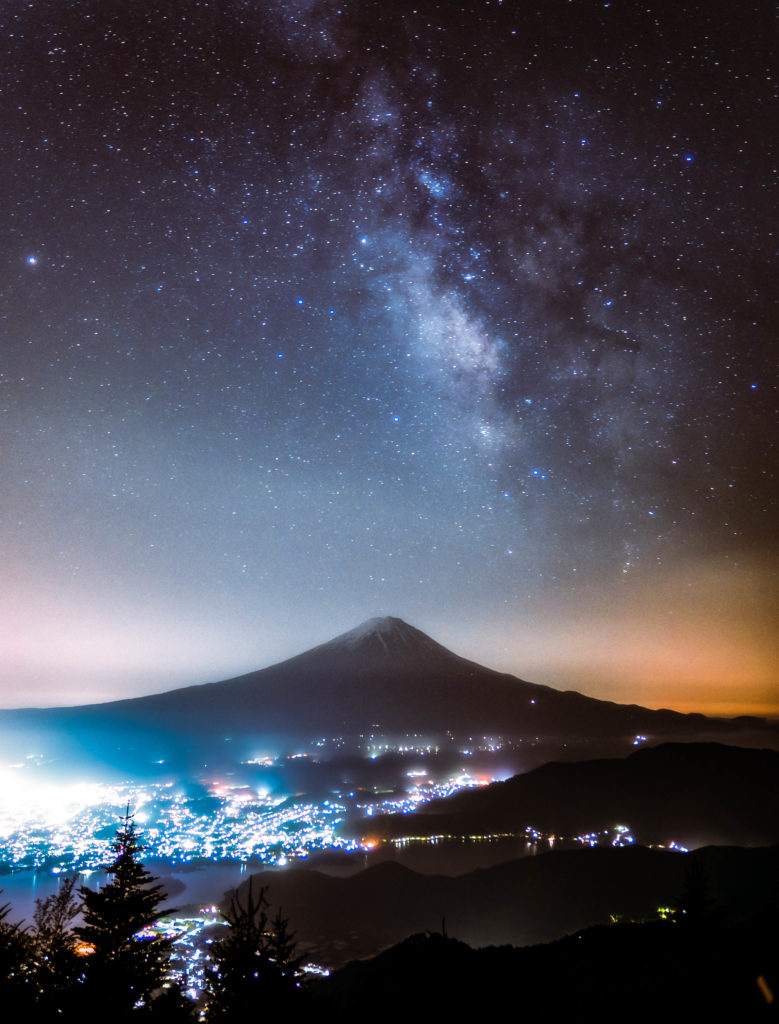 On some days when humidity gets higher, there is a chance for some more fog. This time there was only a small blanket – I hope to return during a properly foggy night in the future. 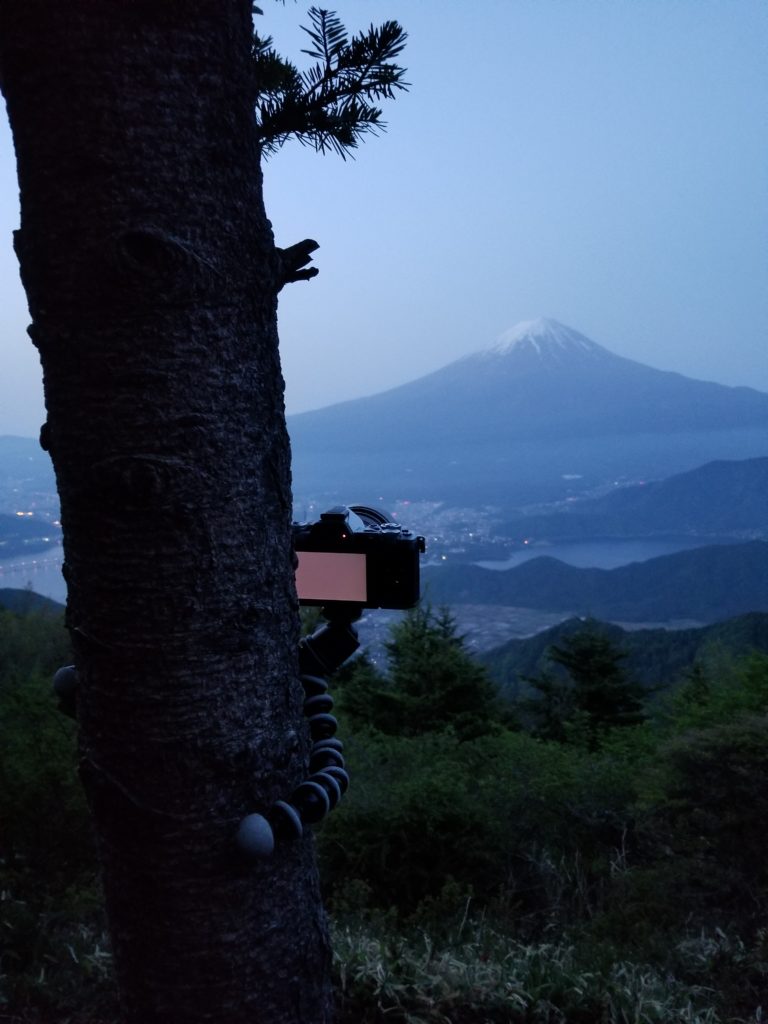 I went with a minimal camera setup, Olympus em5 mk2 and the Panasonic Leica 12mm lens with a gorillapod. I was also carrying my drone. I packed light as I knew I might need to get lost a bit as I’d never been on trail before – this was an extremely good decision as my knees and legs were absolutely done by the time I found my way out of there. 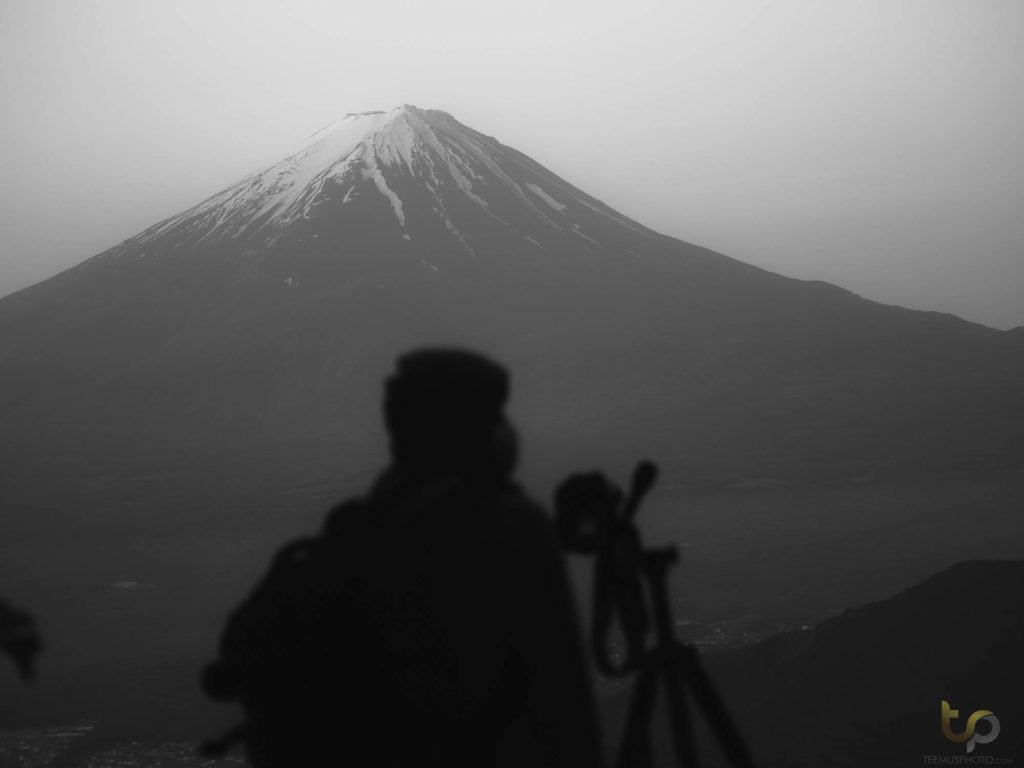 More people showed up in the morning. 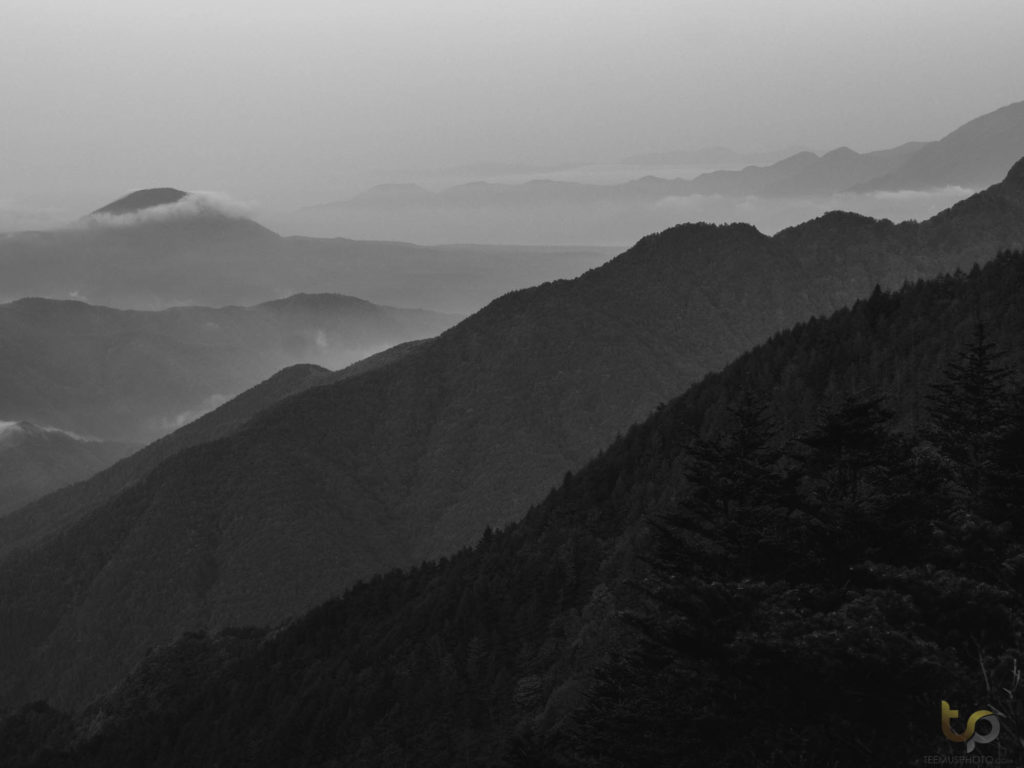 Some fog in the morning

After I was done shooting, it was time to find my way out. Going back the same way wasn’t an option, as one would have to walk about 20+ kilometers down a mountain road (that has BEARS), in order to reach humanity, but I knew there was supposed to be another path down. Had I rented a car this would have been less of an issue, so I recommend you do that if you don’t fancy a hike. Calling a taxi didn’t really work, as I had limited mobile data and didn’t speak japanese (this is a fairly remote part of Japan now). But no problem, I knew there was a path down.

Only problem is that I started going the wrong way. The realization slowly crept in as I seemed to head further uphill and away from humanity. Because I made my way up in pitch black darkness, I had missed the obvious fork in the road that lead to the path downhill.

After an hour I retreated and facepalmed hard. See this map for reference:

Somewhere along the path I decided to fly my drone. I had been hoping to fly it above the fog, but as there wasn’t much of it, regular landscape had to do. I posted some of the footage on my personal Instagram here:

Some drone clips from my hike to Shindou Toge near Mt Fuji last week, a hike that nearly got the best of me.

However as any videographer will spot, I kind of screwed up the exposure and settings, and the light was boring by this time of day anyway, so I’m not super satisfied by the footage.

By the way, about Drone laws in Japan: It is legal to fly in the countryside with no people during daytime only. Do not attempt to fly in Tokyo or you could get yourself in trouble with the Japanese police, who are not the nicest folk to deal with.

After the misadventure, it was already 6am. I’d spent around 7 hours at the mountain, was out of water and exhausted. I couldn’t afford to get lost again or I would be royally screwed. But after retreating in my steps, luckily I did find another path down that seemed to head towards a village. 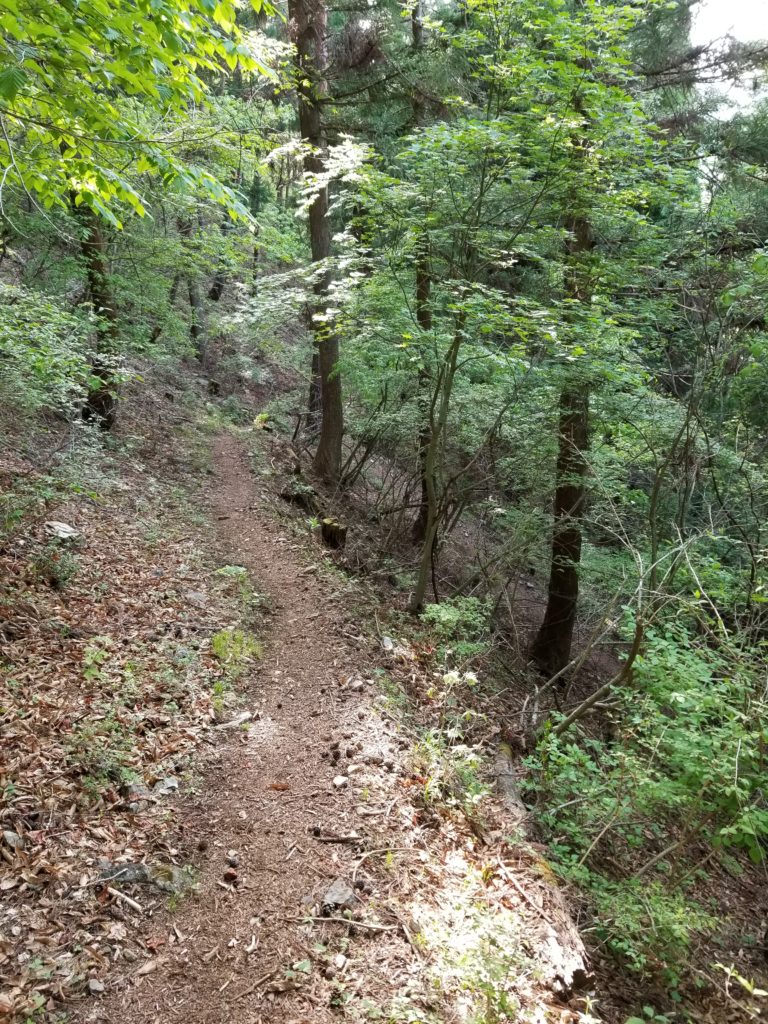 The path is sometimes fairly steep but not a huge issue going downhill. My knees hurt quite bad afterwards though. It took me another 2 hours to climb down. I assume climbing up would take 2,5 hours. 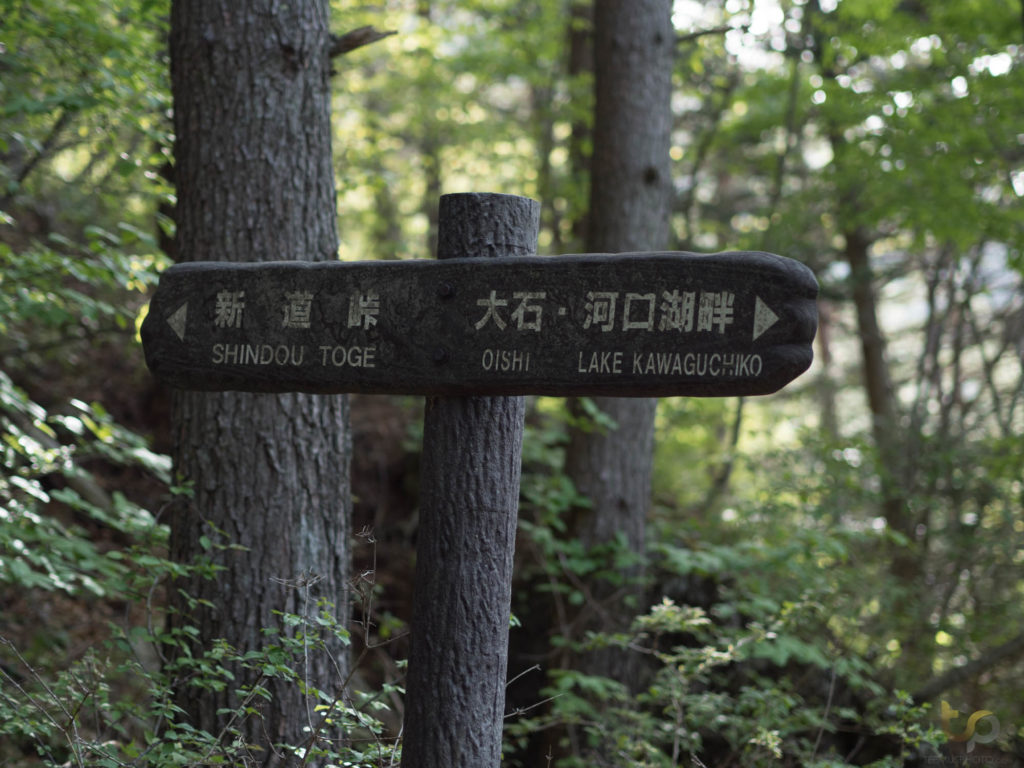 The first english sign I saw was a huge sigh of relief, as I finally knew I was on the right path. 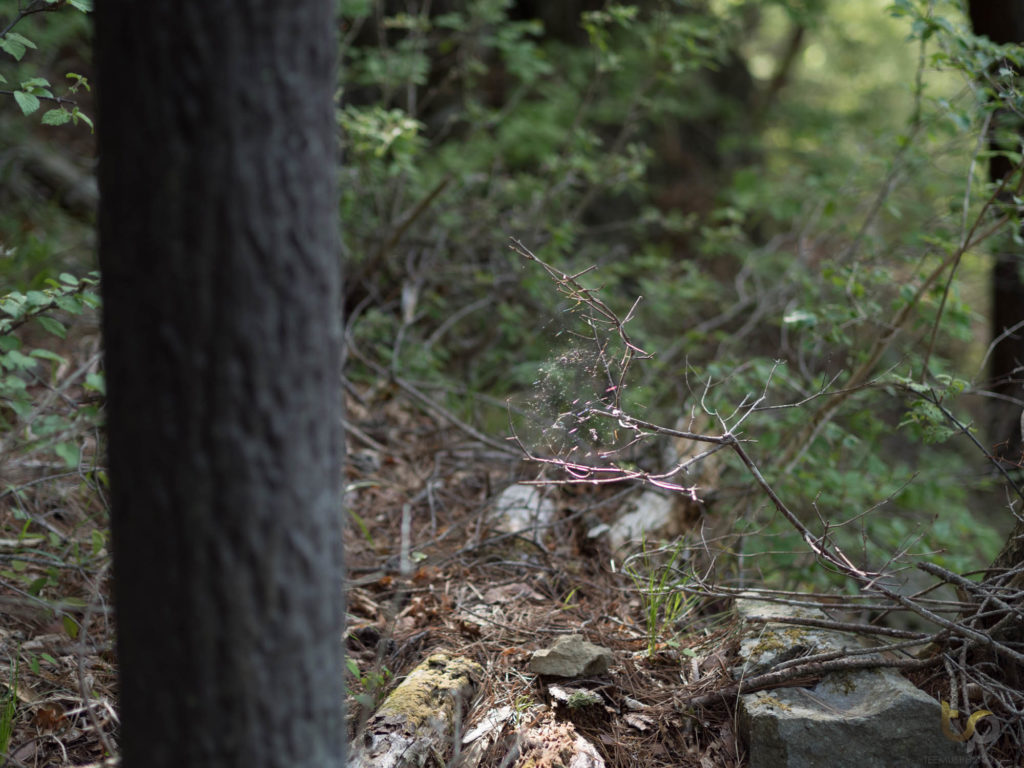 Throughout the hike I was constantly brushing my face against thin spider webs, so keep an eye out. 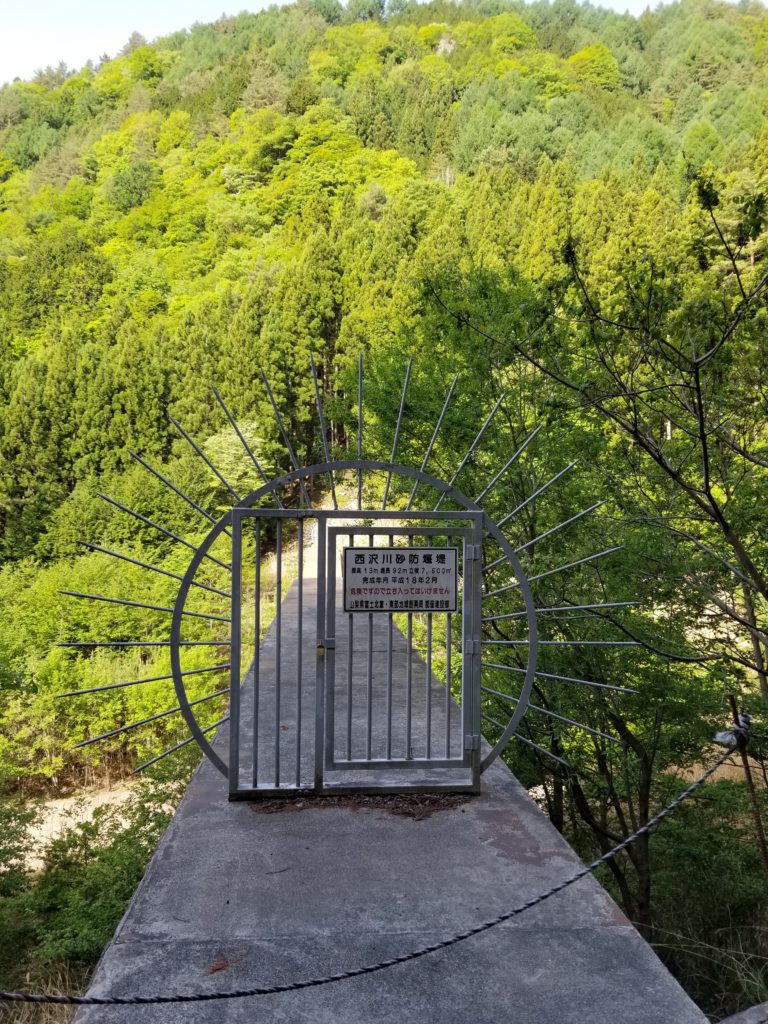 After 2 hours of hiking downhill, I stumbled upon this medieval looking gate system. 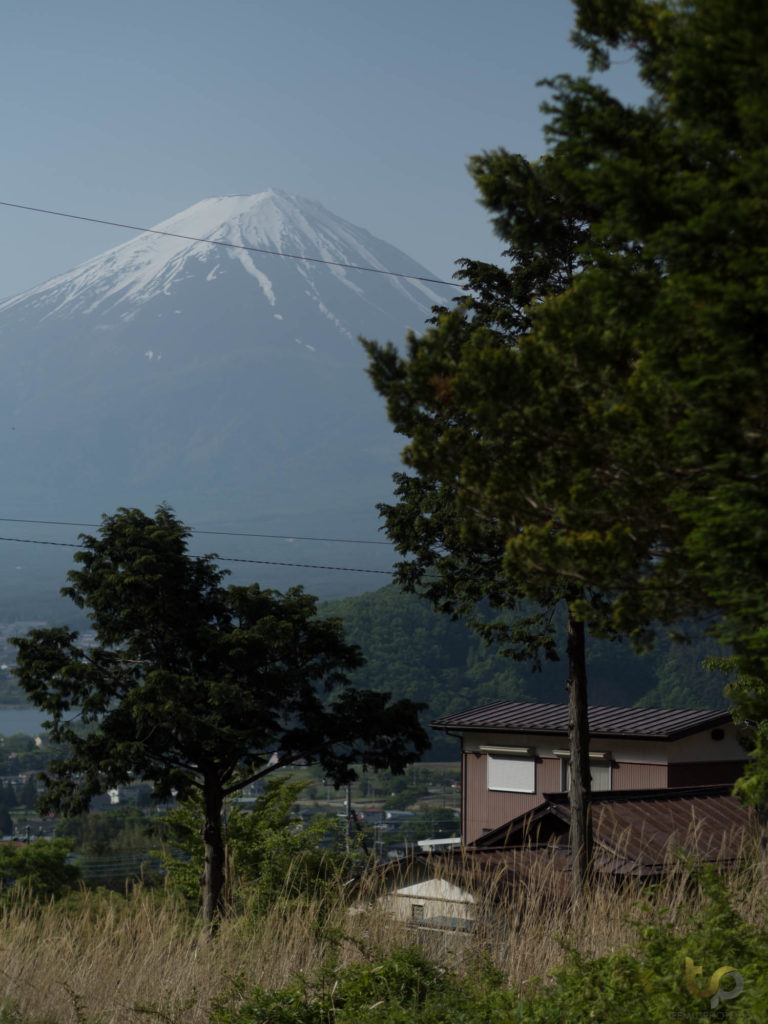 The village at Kawaguchiko is beautiful. It was a very satisfying walk back to the closest bus stop, even though I was practically a zombie by this point.

It was one of the more adventurous hikes I’ve done, but only because I went in blind. If you know where you’re going, it will be relatively easy. But if you wish to have an actual challenge, simply head up the steeper path and skip the taxi to the backroad. Hopefully my documentation was helpful – feel free to DM me on Instagram for any more info or leave a comment below.