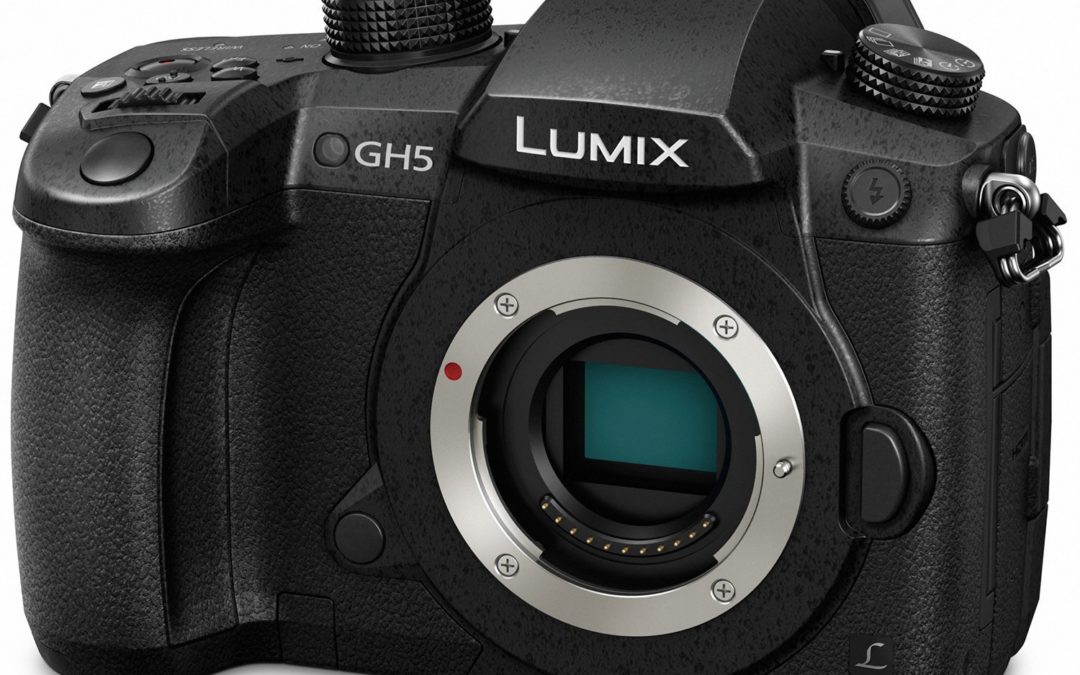 If you are looking for a serious mirrorless camera, really well-built and capable of producing images in all situations and all types of lighting; you cannot ignore the Panasonic Lumix DC-GH5. This camera has garnered a cult following of sorts and revolutionized the whole mirrorless camera segment like no other camera.

The new sensor has got extra megapixels. So, yes you would now be able to capture a lot more detail than the older 16.05 megapixel GH4. Additionally, the 20.3 megapixel sensor on the GH5 do not have an optical low pass filter. This means it produces sharper (and more) details compared to other sensors with OLPF.

Then again sharp details depend on not only the sensor but also on the lens that sits in front of the sensor. Unfortunately, there are not enough great sharp lenses on the micro four thirds platform. If you use the speedboosters and other compatible system lenses you will likely get much sharper images than the proprietary Panasonic micro four-thirds system lenses. 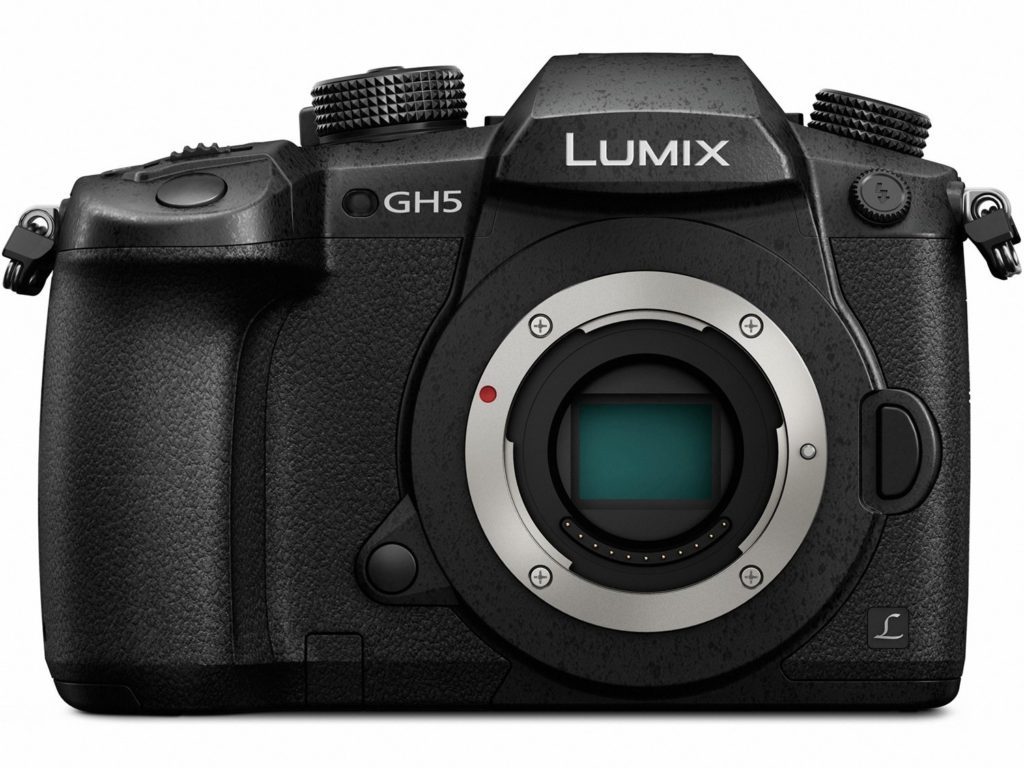 All micro four-thirds systems have a crop factor of 2x. Which means you get a field of view equivalent to half the view you would get through a 35m format lens for the same lens mounted on the GH5.

The built-in ISO range of the GH5 is 200 – 25600. In the extended mode the camera can shoot at ISO 100 – 25600. Low light performance of the camera is acceptably good. Even when the sun is down and you are at the fag end of the blue hour, the camera still shoots good images / videos at high ISO.

One of the new terms that you may have been hearing about a lot is ISO invariance. ISO invariance deals with the ability of a sensor to shoot a RAW file and produce clean results even after the exposure is pushed during post-processing, having shot originally at low ISO. Let’s say that the auto ISO on your camera shows that you should be on ISO 800. However, you shoot at ISO 100 and then push the exposure by 3 stops during post-processing. If the resulting JPEG images don’t add any extra noise than what you would have captured had you shot at ISO 800, then your camera is ISO invariant. The GH5 is nearly good enough to be called ISO invariant. 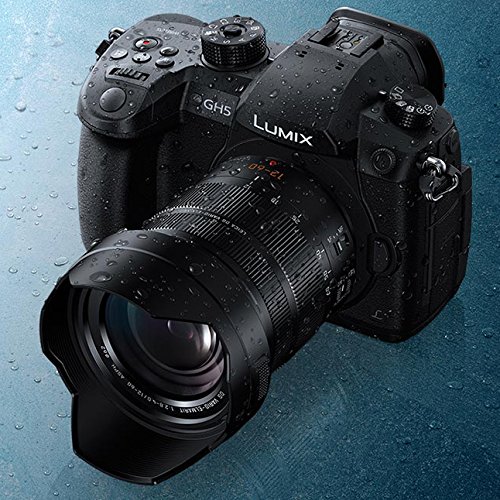 The GH5 is weather-resistant, which is a nice plus!

The GH4’s auto-focusing capabilities were one gray area that was well, really gray. Thankfully the GH5 has cleaned up a bit of that mess. Though it is still not the same as Canon’s dual pixel CMOS auto-focusing, it is better than what we saw with the GH4. Should you be using it all the time? Shooting stills in situations where the subject is moving, continuous auto-focusing is something that you have to use and you have no choice. It does not always gives you the best results though.

Still shooting when the subject is, well still, is a different story altogether. The GH5 has no problems nailing focus in this situation. The problem gets worse when you are shooting videos. As already explained above Canon leads the way in terms of live-view auto-focusing. Use manual focusing whenever you can because that way you have more control over where the camera focuses.

There is a useful Panasonic mobile app that works via the built-in Wi-Fi of the GH5. With this app on your smartphone you can control focusing, among other things, remotely. This tip is for bloggers who are frequently in front of the camera rather than behind it and work as a one-man show.

One feature I would like to mention about is the Focus Pull under Focus Transition. This basically what it sounds like. The camera switches focus between various points in the frame. However, these points are pre-determined. Defined by labels POS 1, 2 and 3, you set three points in the frame you would like to switch focus intermittently during the shot. Practical use of this technique is only during tripod shooting and only for shots where there is no panning moving involved. 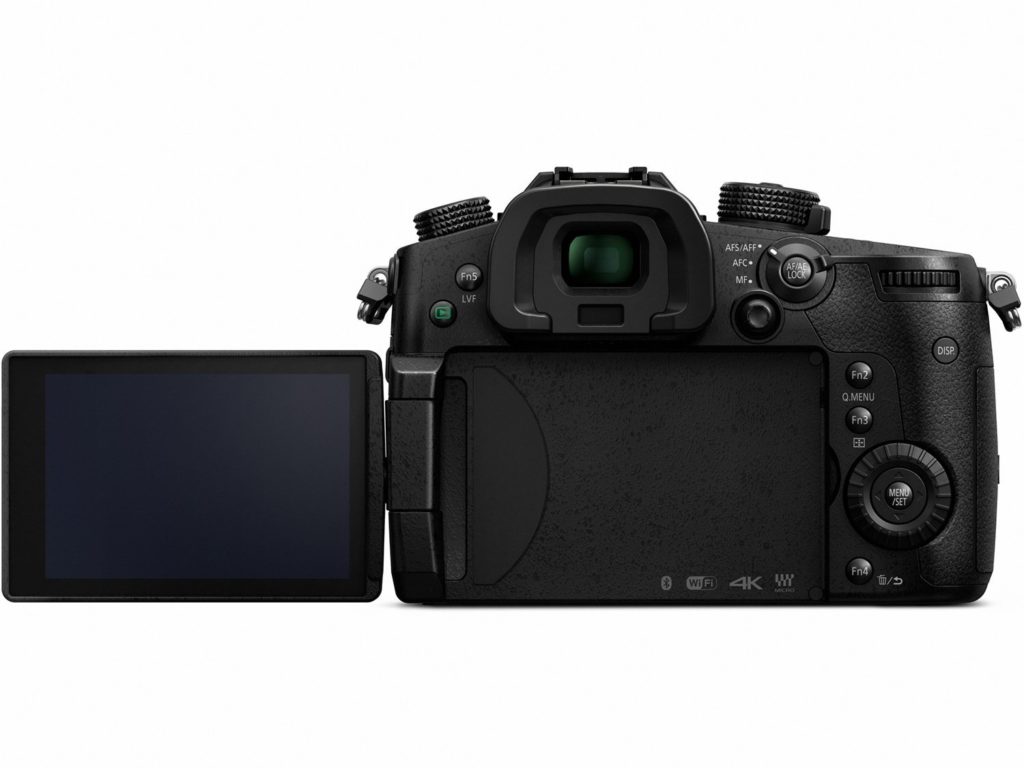 Being a successor to the extremely popular GH4, it is likely that the GH5 would have many similarities. The two cameras are similar but there are also some important changes. Some of those changes, as we shall read in this review are internal, having to do with the software and hardware capabilities of the camera, and as such subtle. But others like the positioning of the buttons and dials on the camera are not so subtle.

Another element that has jumped positions is the microphones. They now sit conveniently on the top of the viewfinder hump. With them the recording button has also moved to the top plate.

Another change that is apparent is the absence of the flash. Some photographers who prefer to shoot with a flash are definitely going to miss it and therefore complain about it. However, others who hardly ever use the flash is hardly going to miss it at all. In anyways, I am not a big fan of the built-in flash. And none of the pro DSLR models e.g., do have that feature.

A feature that is increasingly becoming commonplace among new cameras is the AF joystick at the rear of the camera. For those of you who have been used to a multi-directional toggle button on Nikon systems or a Canon control wheel, this will feel a bit weird initially. If this is your first interchangeable lens camera then you would grow up to it quicker. It is functional though and that is what matters. Still if I were to make a choice between using this protrusion and the extremely useful touchscreen / touchpad, I would choose the later.

The GH5 also is the first GHx series camera that comes with dual memory card slots. You can use these cards in any creative options as requested. You can set one up to cover for the other when it gets filled. Or else you can set both cards to record simultaneously. Or you can also set them up to record videos on one and still on the other.

In many situations when shooting time-lapses or when shooting continuous long bursts or filming in 4K, you don’t have an estimate of how quickly you are burning memory space. A dual memory card slot can be a life saver in these situations.

The GH5 features a 5-axis body-based (sensor-shift) image stabilization mechanism. This ensures that hand-holding the camera in most situations and even when using third party long lenses is possible.

The GH5 has a 3.2″ vari-angle LCD screen with a resolution of 1620k-dots. I love the vari-angle bit which is so much more convenient than the traditional tilt screen. A vari-angle LCD screen is ideal for shooting videos as you can move it in any angle as you want it to when filming. Plus, when shooting on a tripod, which is what you are likely to do, if you want stabilized footages, the screen does not come in the path of the tripod. The touchscreen functionality gives you the ability to focus just by touching any point on the screen.

The viewfinder of the GH5 has improved too. It now has 3686k-dots which gives much sharper life-like representation of what the sensor sees than the previous GH4. Especially, when you consider that the viewfinder on the older GH4 only had a resolution of 1024 x 768 dots (compared to the 1280 x 960 dots on the new GH5). The view through the viewfinder is 100% of the frame.

Being a mirrorless camera has its advantages. One of them is you can keep your eyes on the viewfinder to see what you are shooting (when filming). Of course the LCD screen is the best in the business. 9/10 times you should use this. But in case you need the viewfinder too, it is available as there is no mirror which create blackouts. 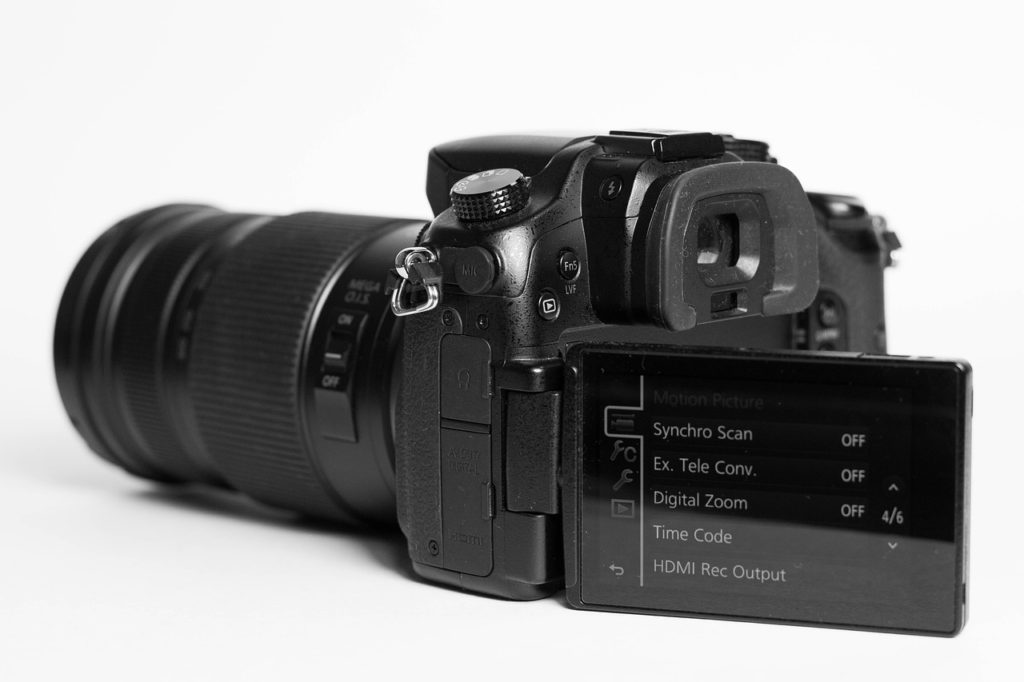 The GH5 comes with built-in Wi-Fi. That allows you to transfer images and videos to your computer via an available network. Also you would be able to shoot using your smartphone by using the compatible Panasonic app. 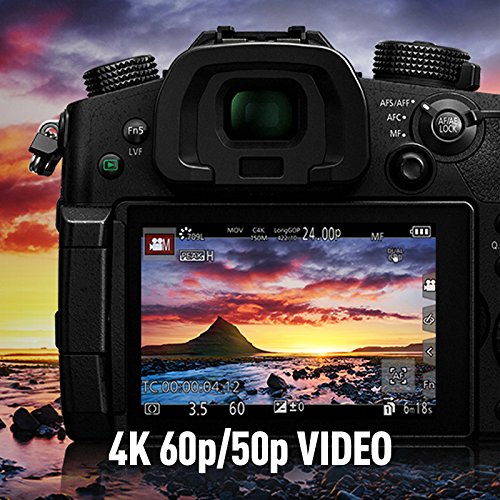 The GH5 is actually widely regarded as the best mirco four-thirds video camera.

In many ways the GH5 is a great budget camera for great quality video work. It has 10-bit 4:2:2 internal recording.

Unlike the weird crop that the GH4 has the GH5 sensor readout is not cropped when video is made. The entire sensor is read and thus there is no change in the crop when changing lenses. Even the quality of the footages were not that good with the previous GH4. Videos that were downsampled from 4K to 1080p looked softer. Quality in the new camera has improved in leaps and bounds in that sense.

Another thing that the GH5 has is 60 fps at 4K. The first major camera make / brand that has this capability. That kind of reaffirms my claim that this is a serious camera for serious video work.

With 60p (progressive) it means you have enough information to create a beautiful high quality 2x slow motion video just with what you have shot in your camera. There is also this 180 fps full HD mode that really take slow motion capabilities to another level. So, if you love making slow motion videos you would enjoy the full HD high frame rate feature.

Image quality is good. There are no major qualms about it. To make a comparison with the GH4, color rendition is definitely much better. Yellows look a lot natural than before as well as the blues. I will gripe about the auto-focusing at a later stage in this review so check that out. The camera comes with a 6K and a 4K photo modes.

The GH5 does have a built-in time-lapse shooting feature. Read more about timelapsing here.

One of the major advantages of the GH5 is its phenomenal battery. The 1860 mAh battery carries enough juice to fire more than 1500 shots and still keep going. I don’t care about the CIPA ratings. Practical usage life is what photographers care about.

Pick the GH5 up and you will immediately find a difference between it and the camera that it succeeds – weight. The new camera is heavier and meatier than the older one that it replaces. By how much? The new camera weighs 725 gram with the memory card and battery. The old camera was 560 grams with the SD card and the battery.

The GH5 continues with the fantastic build quality of the GH4. An excellent weather sealed design that made it possible to take it outdoors for your amateur video work. The new GH5 is more tightly built and feels solid in the hands. The magnesium alloy chassis is all-weather proof. You can use the camera even at 14 ˚ F and the camera produces great images irrespective of whether it is pouring or you are stuck in a dust storm. 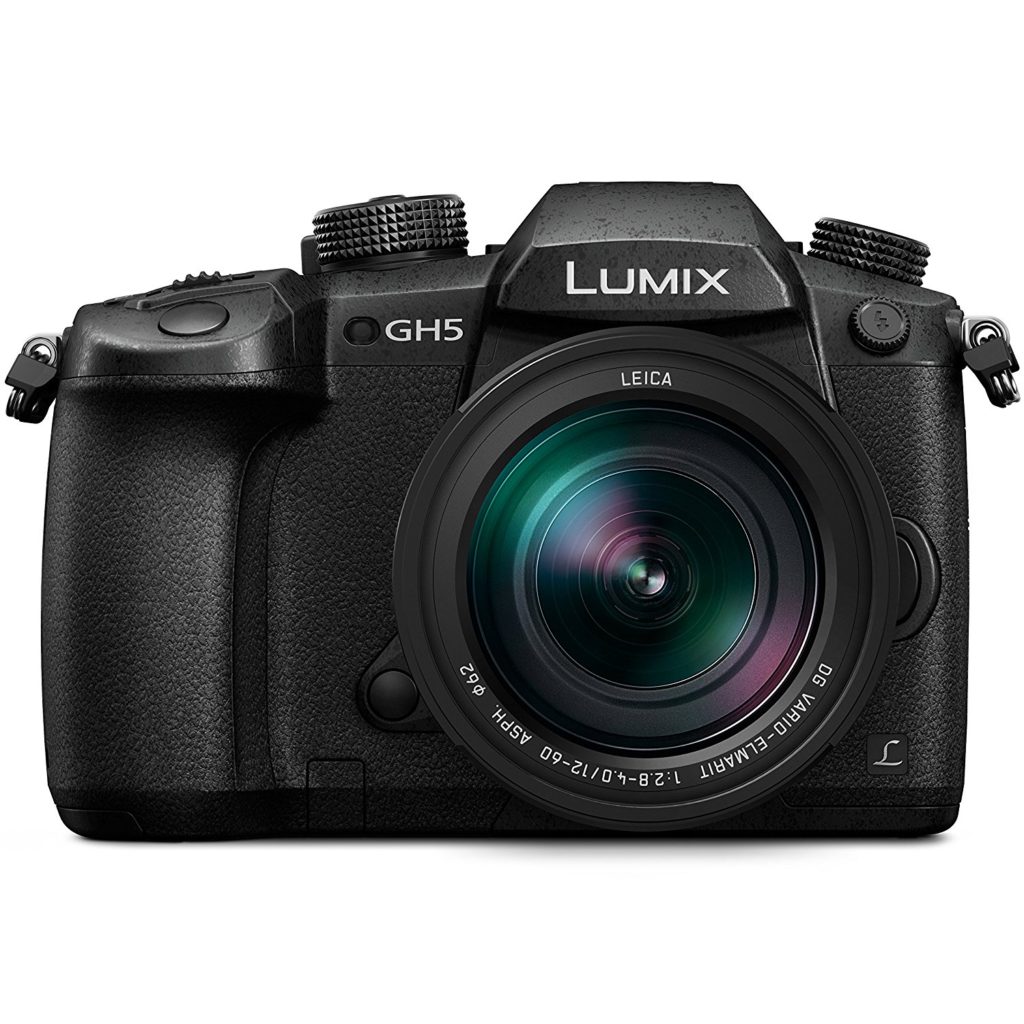 The GH5 is a bundle of changes, both physical and software. It has improved auto-focusing, image quality and detail, better video features and of course low light capability. Not to forget the impressive build quality. The only gray area is the continuous auto-focusing capabilities. All in all an excellent interchangeable lens camera that should give you years of joy shooting with it. I recommend buying the body only and then choosing a suitable set of lenses, instead of going for a kit lens setup. Here’s the body only on Amazon.com.