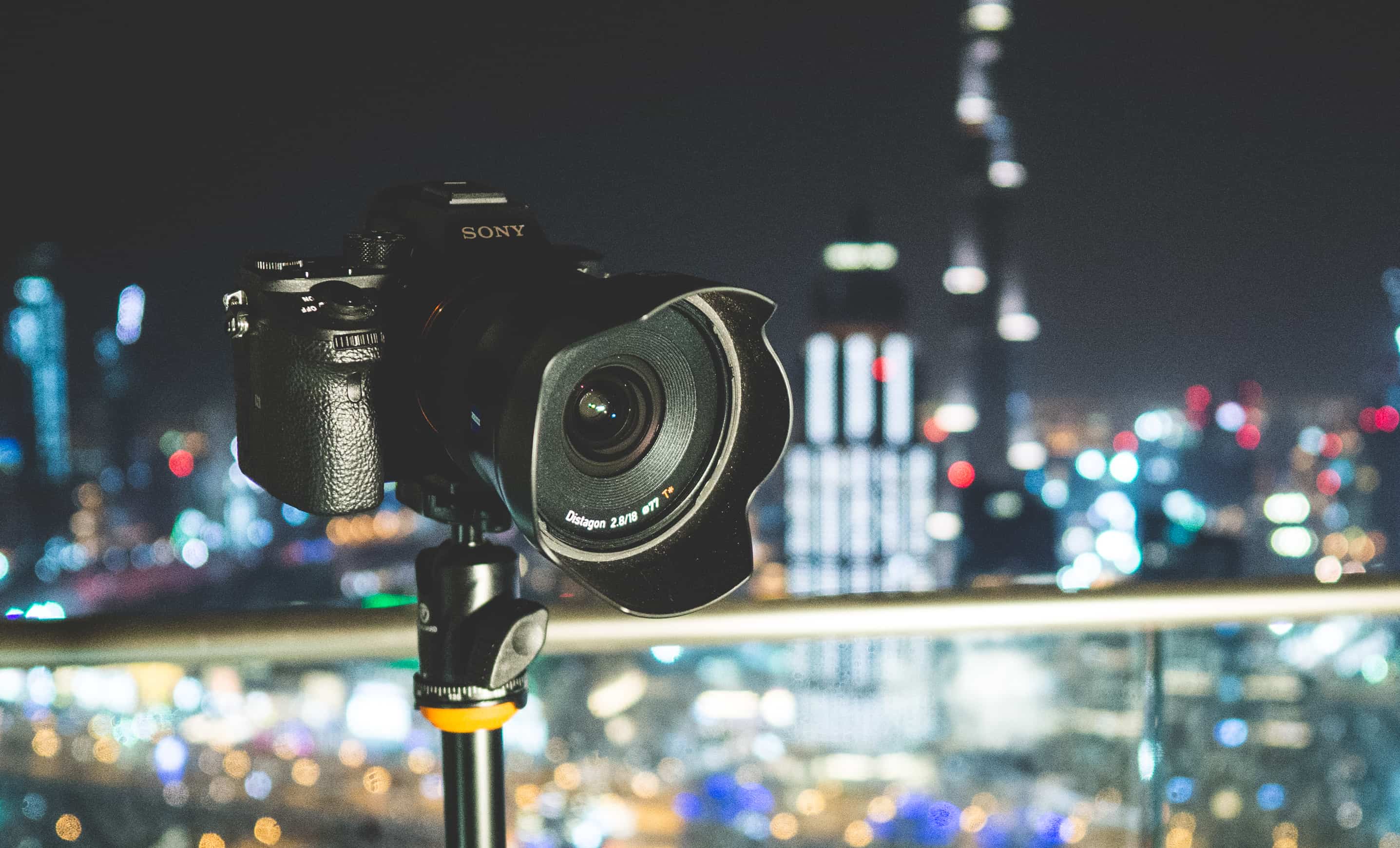 The Zeiss Batis 18/2.8 has been my main wide angle companion ever since I bought the Sony A7R ii camera. I’ve had it for around 8 months at the time of this review, having taken thousands of shots during that time. It’s obviously a great lens, but the E-mount doesn’t have that many options yet either. With Sony having recently announced 2 new wide angle lenses, I thought it’d be a good time to reflect on this lens and write this review.

Some of the best images of my photography “career” up till now have been shot with this lens. I take it with me every land/cityscape shoot, and it always performs well. Usually, it will be stopped down to about f10, but the max aperture of f2.8 gives you a lot of flexibility. In fact, I initially chose this lens over the other options in parts because of that factor – I am very fond of faster primes. And although f2.8 isn’t blazing fast, it’s a great compromise and certainly fast enough, while not inflating the cost or weight of this lens to ridiculous heights.

This lens is great for astrophotographers, being wide enough to get a lot of the sky in the shot and fast enough to allow the use of acceptable ISOs. I also found the f2.8 aperture useful when shooting through windows – I stop it wide open, apply a polarizer, focus to near infinity, and you can no longer tell there was a window on the way.

That said, there is some noticeable vignetting especially when shot wide open – luckily, there is a lightroom preset for this lens that fixes that. Without the correction, some images look less clean.

Shooting wide open does lose some sharpness in the process, but this is still a great lens for handheld night-time cityscape photography, especially when paired with one of the A7 series cameras. Therefore, a perfect lens for me.

Above is an example of unedited vignetting straight out of camera, on the right. It’s not always this extreme, but the above shows that lens correction profile is needed. The photo is also underexposed by about a stop, so that amplifies the vignetting. On the right, I’ve enabled the profile and fixed exposure.

One area where this lens impresses me is in the lack of barrel distortion compared to other lenses of similar focal length. A much lesser amount of perspective is distorted with this lens, although it’s natural to get some at as wide as 18mm.

If editing is a normal process for you, as I image it would be for most people in this target market, then there’s no reason not to recommend this lens. After all, the lens correction can be applied automatically on LR, so it’s not a big deal for me. Some might even enjoy the vignetting effect – I know I sometimes leave it unfixed when it fits the mood. 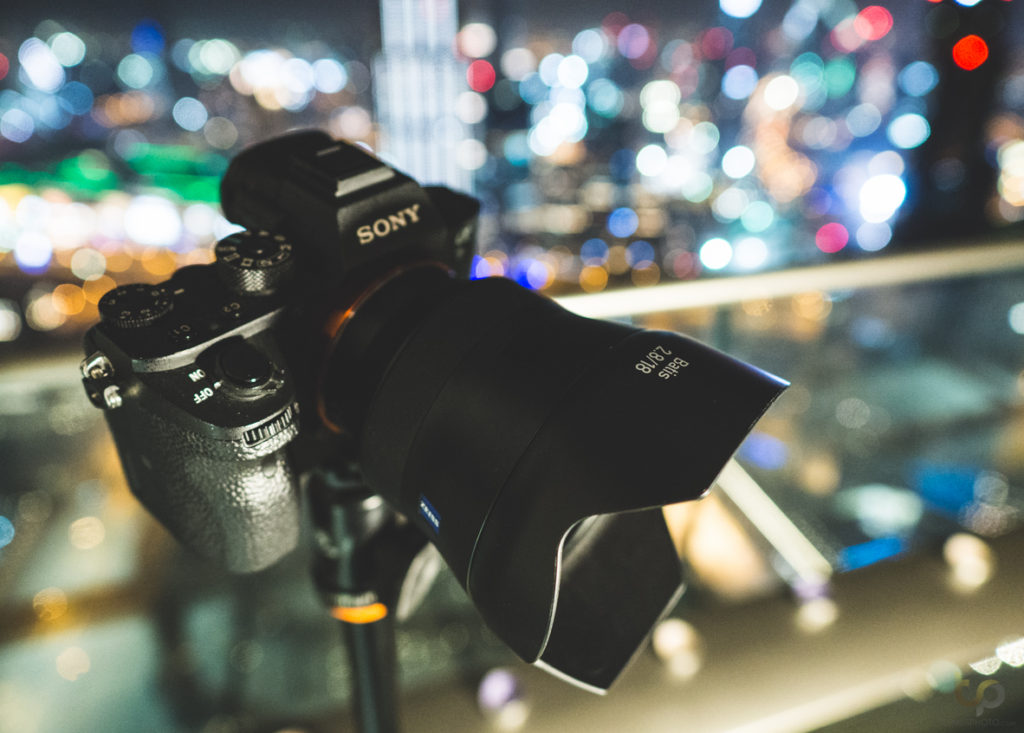 When Sony announced the new 16-35mm f2.8 lens, coming out in summer 2017, I briefly considered replacing my Zeiss 18mm with it. What changed my mind was seeing some photos of the new 16-35mm lens – it looks like a brick compared to the small and light Zeiss 18mm f2.8. I haven’t had the chance to hold the 16-35 GM lens in my own hands yet, as it hasn’t been officially released, but if the older Sony 16-35mm f4 is anything to compare with, it will be significantly heavier than the almost floaty Zeiss.

One of the more interesting aspects of this lens is the digital focus metering screen, built in to the top of the lens. It makes setting focus easier in some situations, and it looks freaking cool and futuristic – although honestly the real life usability is negligible in my experience. I would much rather have a MF-AF on/off switch or an aperture ring in spite, in terms of pure usability. However, those would ruin the slick design of this lens. The lens hood also matches really well with the body – rarely do you see such a beautifully designed lens. 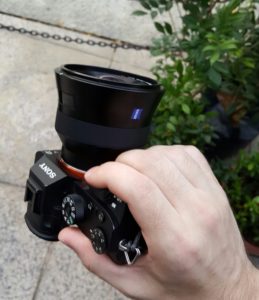 Filters can be screwed in easily, the lens accepts 77mm filters – nicely, that’s the same number as on the Sony 85mm f1.4 GM lens, so you don’t have to buy another set of filters if you also own this lens.

The lens cap the Zeiss 18mm comes with is awfully flimsy though, so I suggest you buy a separate lens cap for it. The included lens cap comes off too easily, which is annoying and results in dust covering your lens too easily. And it keeps falling off in the bag.

When you leave out the lens hood, this lens starts seeming really tiny. For this reason I only use my lens hood when forced to. The lens manages glare from the sun or street lights better than any wide angle lens I’ve tested in the past, even without a lens hood. Therefore, I only use the hood in rain.

The focus ring is made of robber but is focus-by-wire. Some mind find that an issue, especially videographers. This lens is made with still photographers in mind first and foremost. For stills, there has been no issues with the focus ring.

If you wish to see some more sample images taken with this lens, there are some on my Flickr here.

(You will support this blog if you do – plus, one can never go wrong with Amazon.) 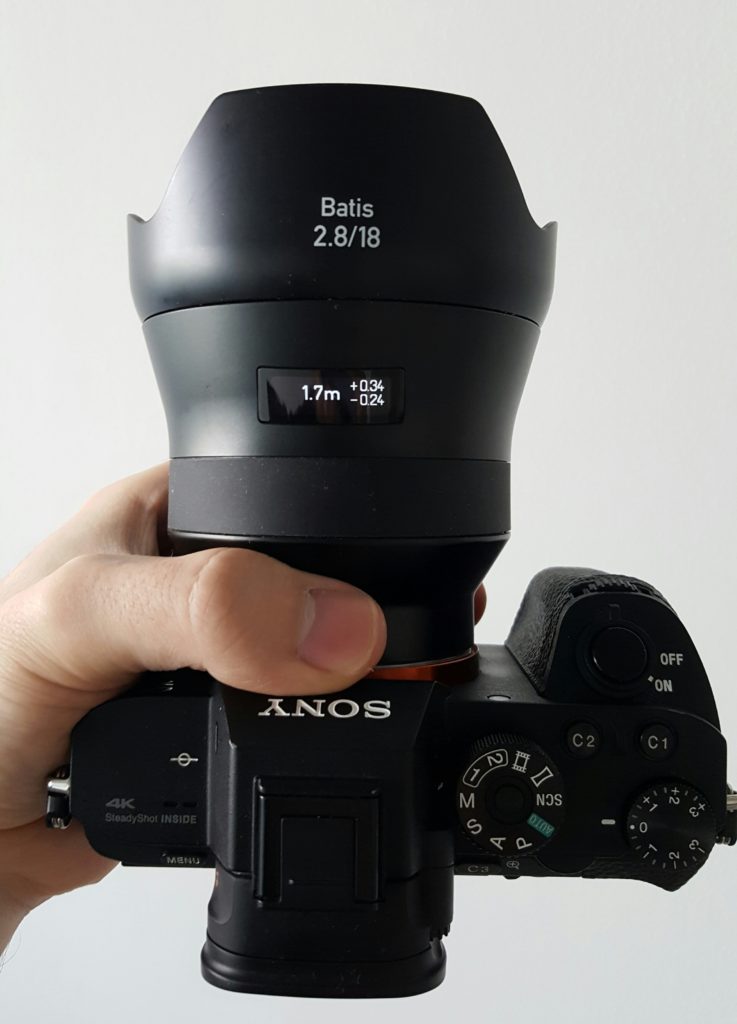 The focus screen is only active with manual focus mode turned on.

Not quite convinced of buying the Zeiss 18mm f2.8? If you’re using Sony’s FE-mount, I would take a look at these alternatives:

If you’re fine with a slower lens, then the current 16-35mm lens from Sony is also an option. It should get a price drop soon, but currently retails at $1300 – in my opinion, way too much for such a slow and heavy lens.