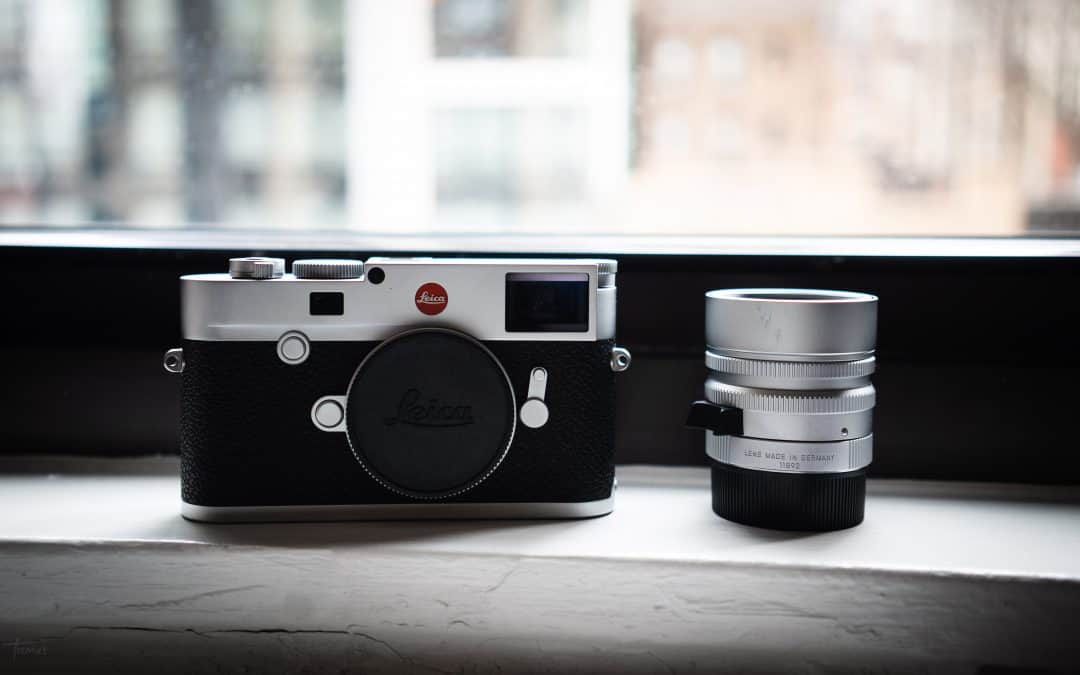 I’ve always thought Leicas were cool and wanted to try one for so long. Well, I finally did it and went out and purchased a Leica M10 with the legendary 50mm f1.4 lens (yes those are affiliate links). Normally, I shoot Sony A7iii, but mine’s been acting up and will be needing repairs soon, so I thought this’d be the perfect time to get a second camera, and I decided to YOLO and get a Leica.

Let’s get the obvious out of the way, the M10 is an overpriced camera. I bought an “open-box” body and lens, which saved me about $2000 but still got me gear that was as-good-as-new. It’s a very niche product, designed for enthusiasts of photography who hopefully won’t go broke buying one. It’s NOT a magic camera that will instantly make you a great photographer. Objectively, the Sony a7iii is a better camera, and I won’t be getting rid of mine any time soon. For the price of a Leica body + lens, you can buy 5-6 brand new Sony a7iii’s, which is already a camera on the expensive end of photography equipment. So if you’re on a budget, the Leica M10 is probably not the best choice for you. OK, with that out of the way, let’s get into the reasons why one would still want this camera.

Why I always wanted a Leica 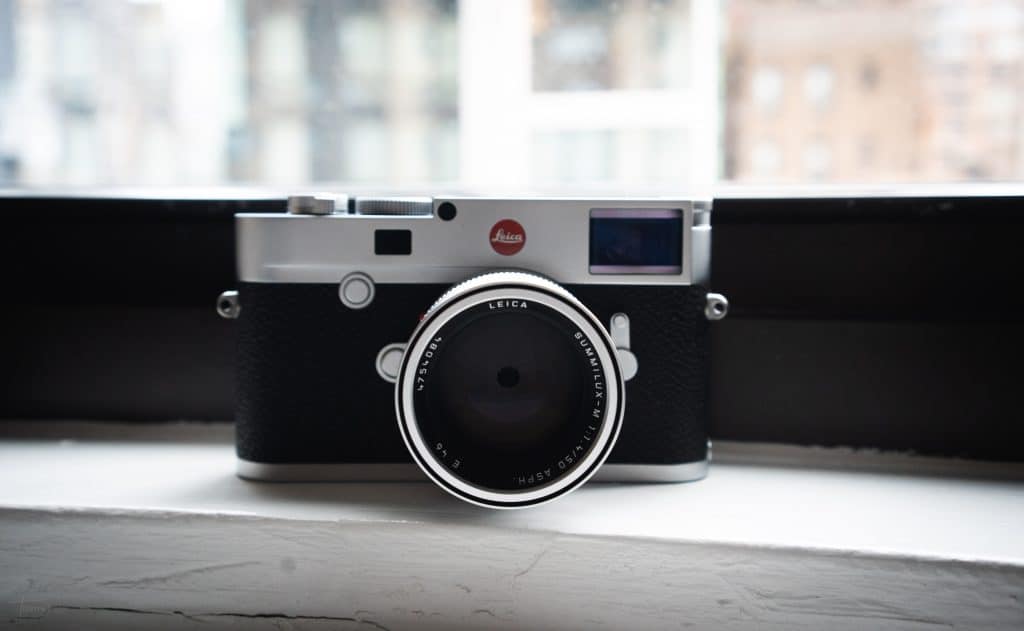 The Leica M10 silver edition is one of the coolest-looking cameras I’ve ever seen. It’s a very elegant design. It’s simply a very nice piece of luxury equipment, similar to owning a nice watch. Except I don’t give a crap about watches. The Leica flex is a real thing – a friend of mine gave me a good chuckle saying “the first thing anyone does with a Leica is take a picture of it”, which I also got caught doing. This can be interpreted in two ways – either there is nothing other than flex-power to Leicas, or that the camera is so well designed that it simply inspires one to take a picture of it. But to defend myself, I’ve taken a photo of all my cameras when I first got them, whether it was my first Olympus em10, my Sony, or even my film camera.

Aside from the Leica-flex effect, I wanted one due to their famous optics. Their rangefinder lenses are some of the best lenses ever made, especially when shot wide-open. There is some debate over whether the famous “Leica-look” is real or placebo, but in my mind there is no doubt that at the very least, this is as good as lenses get. In fact, I was already impressed when I first tried a Leica-Panasonic co-engineered lens for the micro four-thirds system, so I really wanted to find out how the legit Leica rangefinder lenses would hold up.

Thirdly, I wanted to slow down my photography a bit. I’ve used film cameras and manual focus only lenses before, and both made me appreciate the change in approach that I was forced to take. One doesn’t NEED to buy a Leica for this experience, again, just using a manual lens will do the trick – but I wanted to combine the effect with superior image quality that could be produced with the symbiosis of using a Leica body, perfectly designed to fit the lens – and what that really means is, I wanted to wield the Leica-Flex.

The last rationalization I made before making the purchase was the fact that used gear, especially branded, timeless used gear like Leicas, retain their value quite well. Sure, it set me back a fair amount of cash buying one, but if I decided I don’t like it, I can always get 70-80% of that cash back by just selling it. First I’d figure I’d just rent one, but renting one for a month or longer would be more expensive in the long run, so I decided to go this route instead. There are many ways to buy and sell used equipment, whether it’s Ebay, Craigslist or Adorama directly. 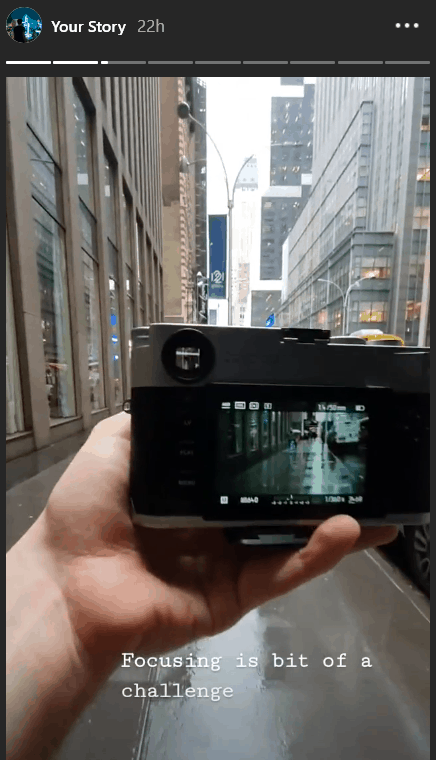 I’ve done 2 street shoots with this camera so far. The first thing I noticed may be surprising – the shutter sound was extremely satisfying. The subtle click is very enjoyable, something I’ve never cared about much when shooting other cameras.

The second thing I noticed was how damn difficult rangefinder focusing was. I spent the whole first shoot trying to figure out how to get things in focus, and I felt some photography FOMO as I was seeing missed opportunities all around me. It didn’t help that I was in rainy New York, one of the most interesting photography locations on the planet. As a result, my first shoot consisted of a lot of shots of people’s backs when they were waiting to cross a road, simply because it took me a good 10 seconds to nail focus. I’m sure this will get easier over time, because by the end of the second shoot I was starting to do much better. Focusing on this thing takes some practice, you can’t expect to nail it out of the box immediately – but once you do learn the process, then it’s a whole different story, so I can’t take too many points out for that reason.

Because of the difficulty focusing, I found myself stopping down to f4-f8 constantly. In the daytime, this was fine, in the night, it was more challenging. I’d also forgotten how thin a depth of field f1.4 was, because my Sony 55mm only goes down to f1.8 in comparison, which is a much bigger difference than I remembered. On the Sony, I rarely touched the aperture setting, but on the Leica it was constantly on my mind.

These difficulties did eventually, at the end of the second shoot, allow me to slow down a bit and reminded me to be one step ahead, instead of reactively snapping everything that caught my eye. Once I accepted that I’d miss shots 100% of the time when I wasn’t anticipating them, I started feeling more creative and started enjoying the process more. This would definitely be a great system for when one feels stuck in their photography. It does force you to think more and be more creative. But again, that’s not strictly a Leica effect, any manual, slower to operate camera will achieve the same result. And I do recommend that for anyone – it helps you a lot in the long run. Despite that, I did pull out my Sony on occasion, because it started to rain quite heavily and I was in the middle of Manhattan – I just couldn’t miss some shots. Also because I had only one battery for the Leica M10, which apparently has terrible battery life. I could barely get 150 shots out of one 80%+ battery charge.

Mind you this is only a first impression. I know people who are more experienced with rangefinders can nail focus just as well, if not better than autofocus on the Sony. But getting to that level will take months of practice, so I am nowhere close yet.

I was excited to write this post, so at the moment I’ve yet to even edit the files I’ve taken with this camera. That said, initial impressions are very good – the colors in these files already look great even without edits – much nicer than Sony raws in fact. The image quality lives up to the hype. However as you can probably guess, half my shots are out of focus so overall the amount of keepers is much lower than it should be. But, that’s my fault, I need more practice.

Below is one undedited DNG sample. Bit of a snapshot but the colors are already very nice in my opinion: 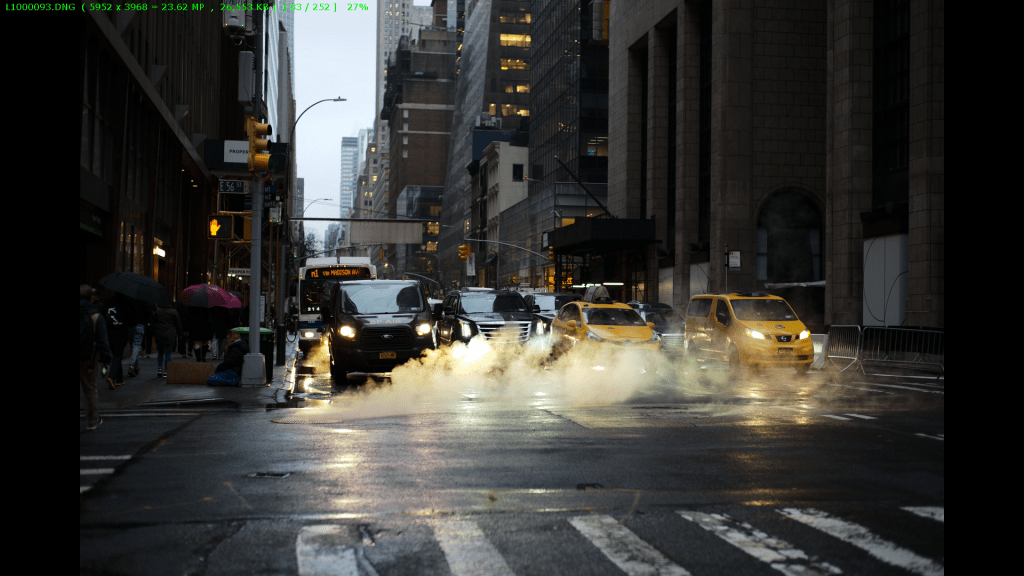 Other than that, I can say that I had a ton of fun with this camera so far. I’ve bought an overpriced extra battery for $200 so I’ll have some more longevity, and will return with some more thoughts in a month or two once I’m more used to this camera. I suspect I’ll have lots more time to write then, as we all might be quarantined…

In conclusion, I am quite happy with the purchase. I think as long as you know what to expect, you will enjoy the camera as well. You’re not getting superior specs or pure performance, you won’t be transformed into a superstar photographer just by buying a Leica. What you’ll get is an elegant, fun to use, eye-catching rangefinder that produces stunningly sharp images – that will take some time to learn how to use consistently in street photography. It’s an one-of-a-kind luxury product that delivers.

Thanks for reading, stay safe everyone! If you enjoyed this article or have some thoughts, feel free to leave a comment below. You can also find me on Instagram as @teemu.jpeg. 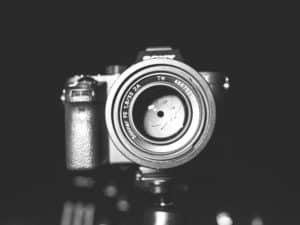