Snow and Geishas in Kyoto 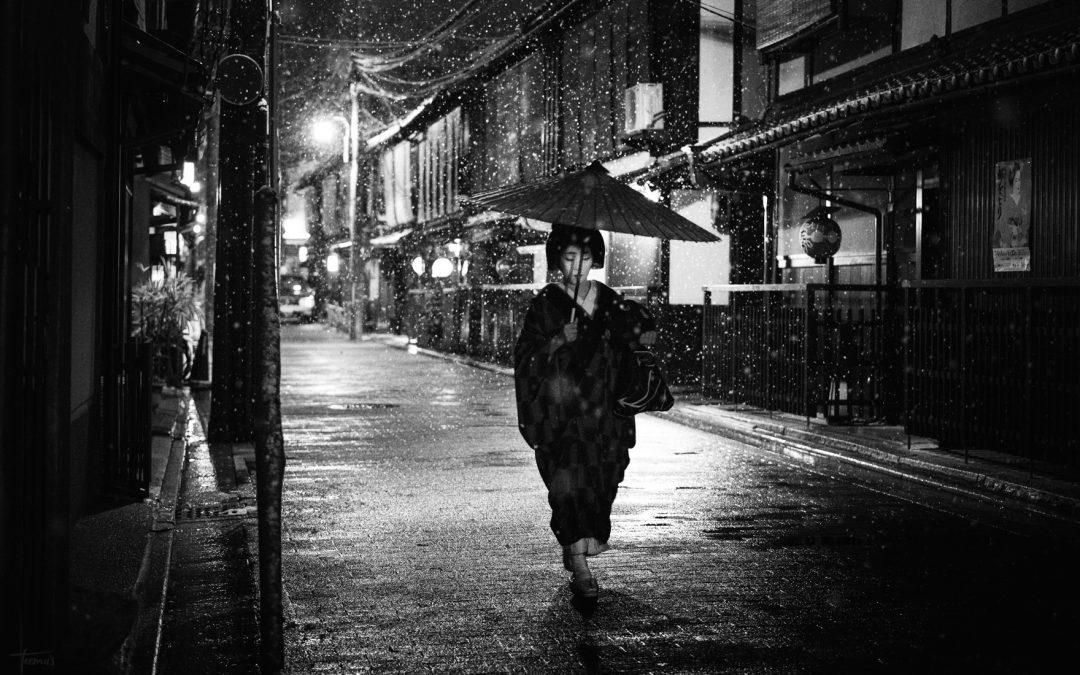 Or should I say Geiko?

This post will feature a gallery of some street photography I did in Kyoto on a relatively rare snowy winter day. I traveled to Kyoto from my base in Osaka 3 times in total, the first 2 days I mostly failed to get any shots as most of my time was spent wandering around half-lost, trying to figure out where to go for the best scenes. I had a difficult time getting any photos of Geishas either – but then on the 3rd day it all came together.

Below I will share some tips on how to spot Geishas in Kyoto and which areas are the best for street photography. 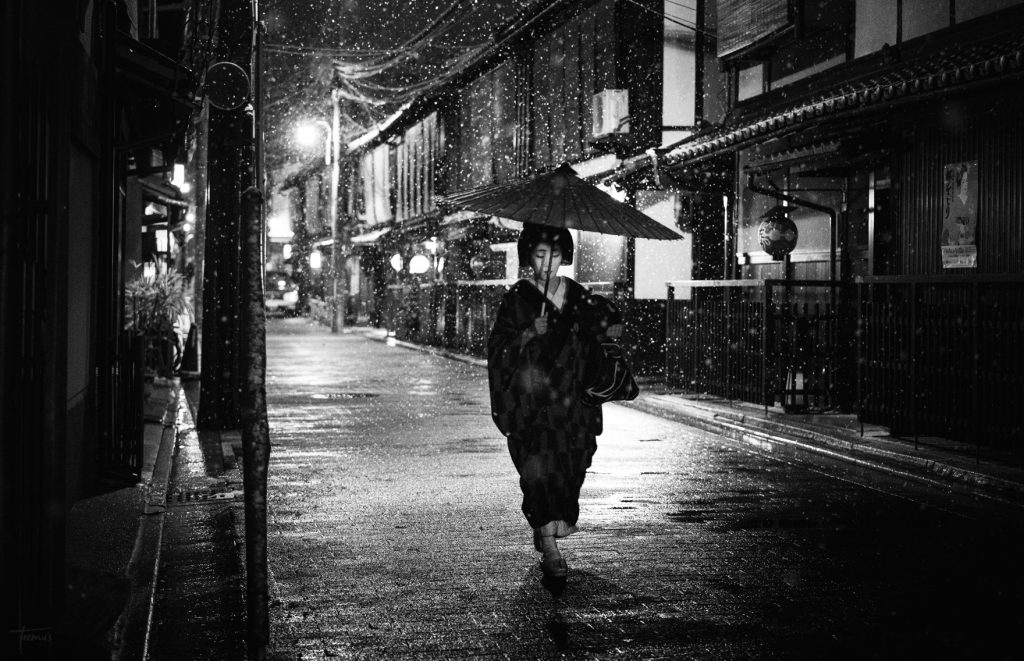 Is it ok to photograph the Geishas in Kyoto?

On one hand, I’ve heard it said that it is quite rude to take photos of the Geiko in Kyoto. On the other hand, everyone does it – so many people pull their phones out and blatantly point it in their faces, sometimes even trying to sneak selfies. The Geishas sometimes seem quite annoyed at tourists, other times they’re in a better mood. I think the key is to be respectful and preferably subtle. Don’t obstruct their paths or be rude as they have a busy schedule. Otherwise, I wouldn’t worry about it too much, unless someone specifically forbids you of taking their picture. So basically, don’t be a dick and use common sense. 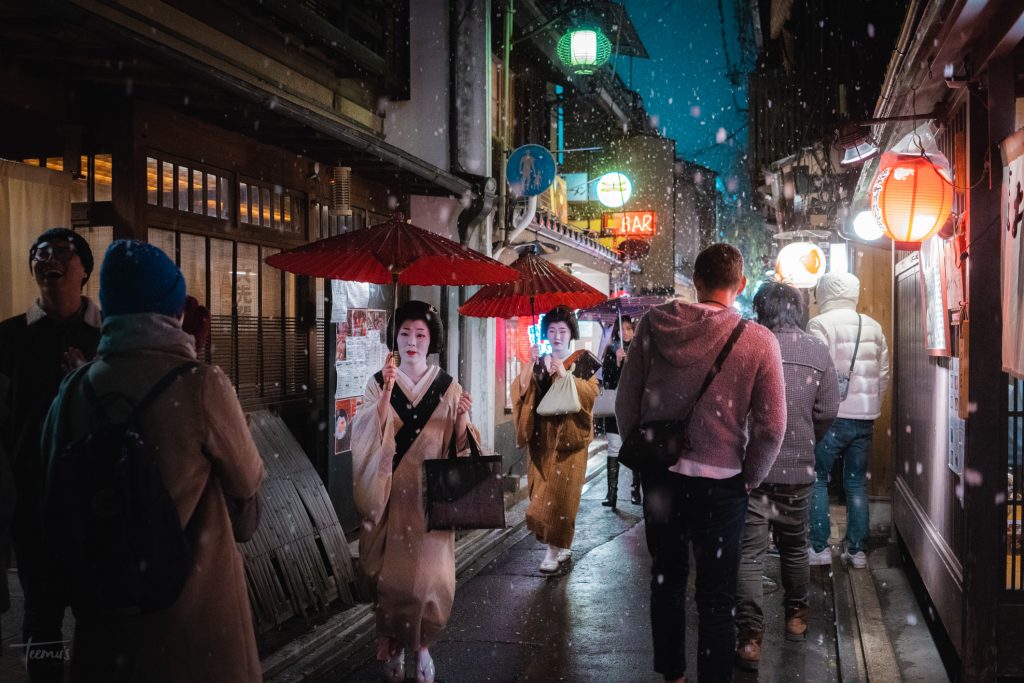 This is one of those expectation vs. reality type of scenes.

Basically, there’s 2 main areas where you have a good chance of seeing any geiko/maiko. Ponto-cho, which is a long, narrow street in central Kyoto, and Gion, a wider road about 10 minutes from Ponto-cho. Ponto-cho looks really great IF and IF you can catch a moment when there’s no tourists in your frame. 6-8PM is a nightmare, I’d recommend going to Gion during this time instead. 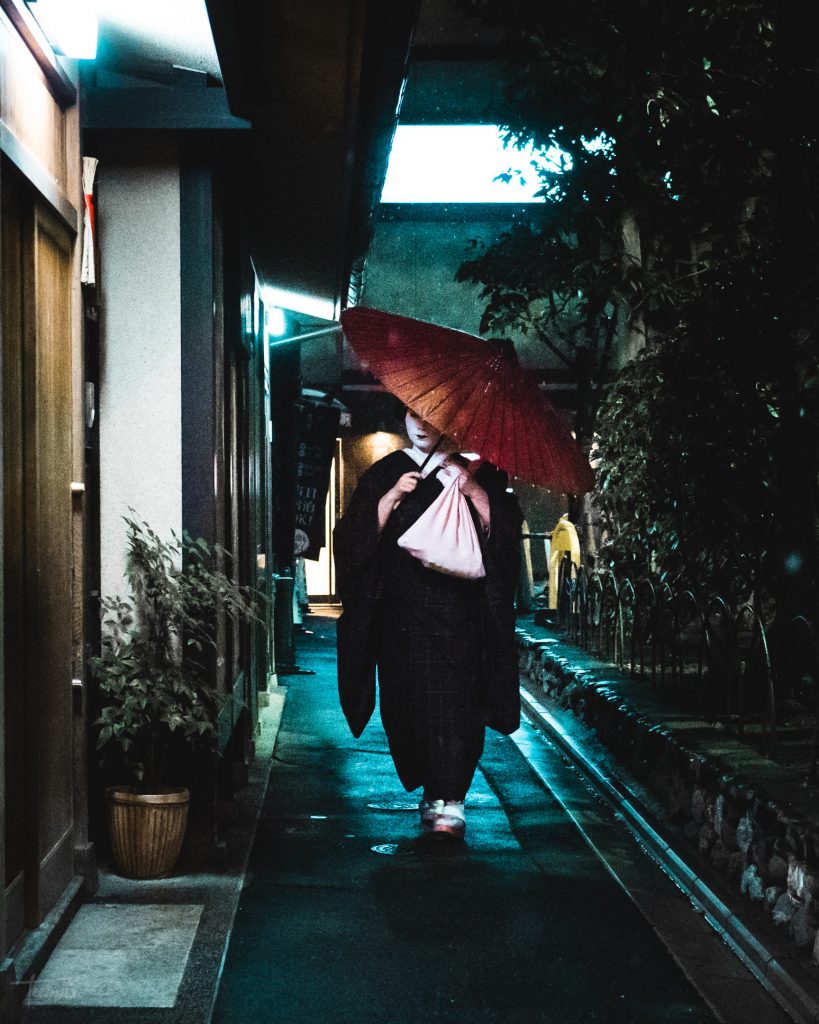 What makes things extra challenging is that the Geishas are often in a hurry, they come out of buildings just to walk a few blocks or sometimes even a few meters just to disappear in another neighboring building. But unless it’s a weekend*, you can sometimes go up to an hour without spotting any at all. A few times, I simply didn’t have my camera on/ready and I missed the moment, and another time I was blocked by tourists. One time, I missed the autofocus. And another time, a Geisha came out right in front of me and I thought it would be just too rude to point a camera at her face from that close.

*(Sidenote: Ideally, go on weekends if you want to photograph Geishas, so many more of them then). 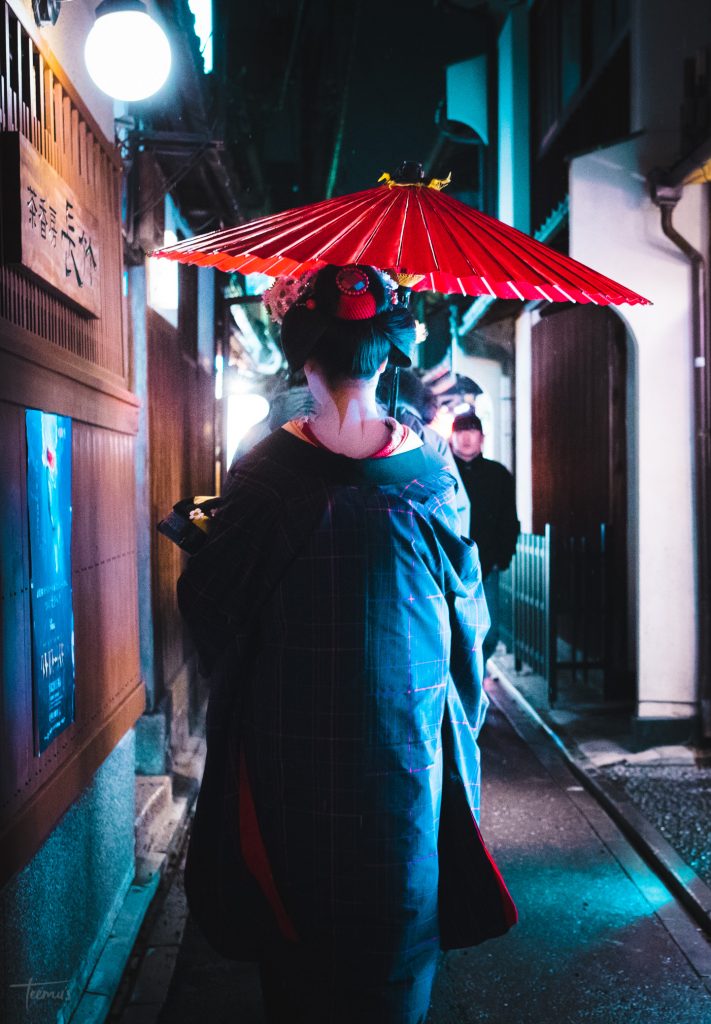 When shooting in Ponto-cho, I eventually figured out which buildings specifically they were coming out from/heading to, and then just waited long enough until they walked into my frames.

In general when it comes to street photography, I find it a lot less confrontational to anticipate your shots enough so that subjects will walk into your frame, instead of blatantly pointing my camera at them while making eye-contact. I get in less trouble this way. Plus, it forces me to slow down and really thing about my shots, instead of reacting to the environment and always being a second late, this way you can get better shots more consistently. 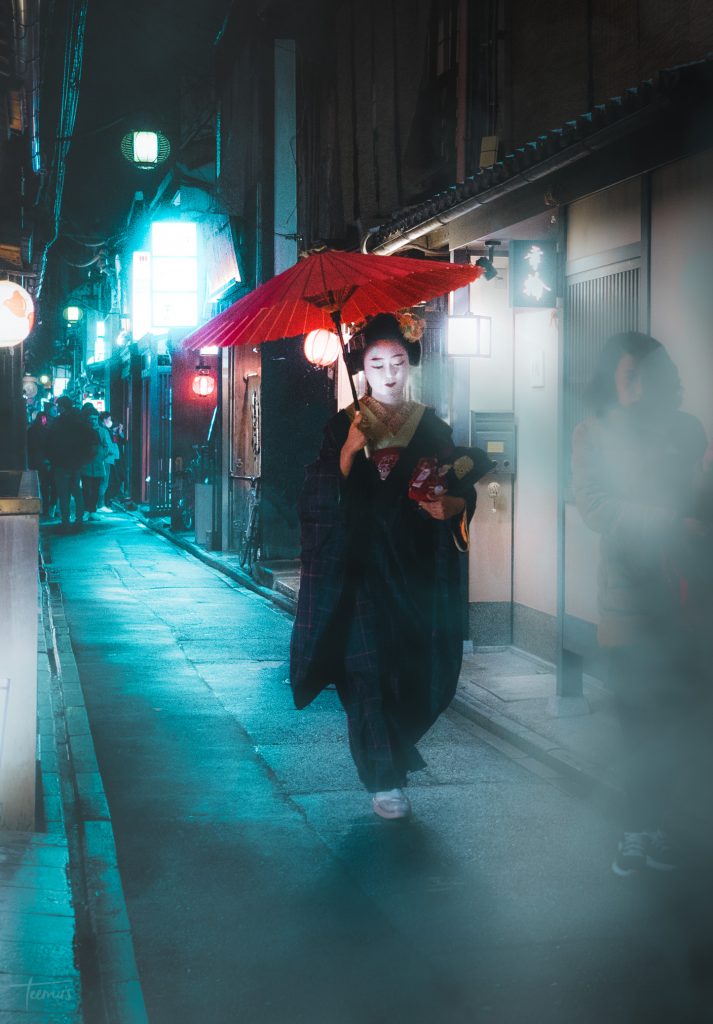 On this shot there was a tiny amount of smoke coming in from a nearby restaurant – but there was a tourist ruining the shot. So that gave me the idea to exaggerate the smoke in photoshop, hiding the tourist and giving a more magical effect. I almost never use photoshop though, most of the images you see here are edited only on Lightroom. 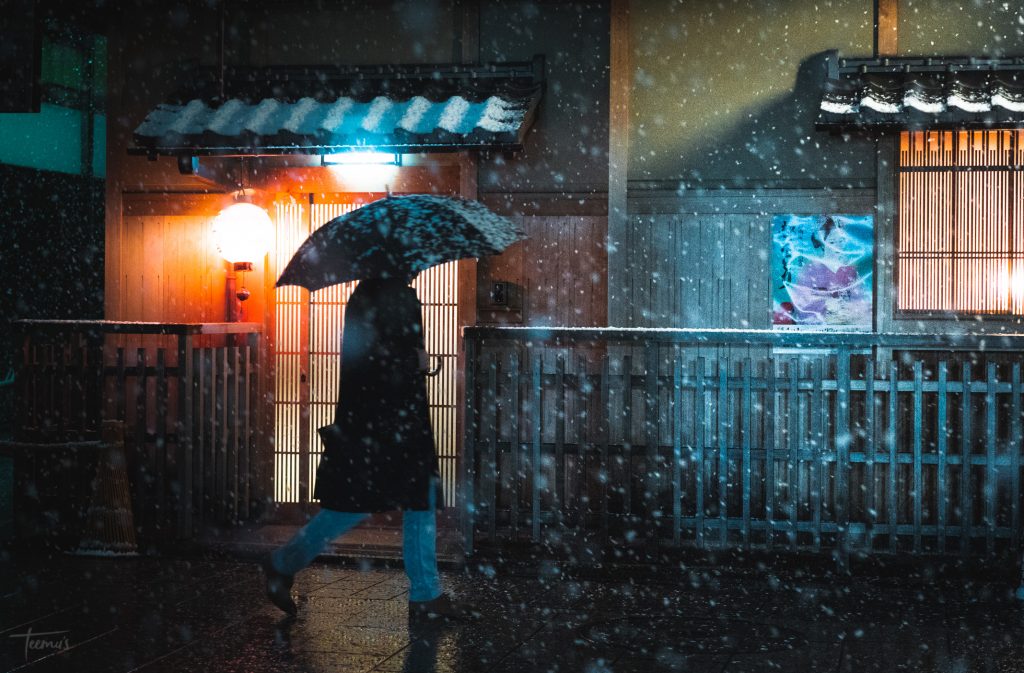 After Ponto-cho, I headed to Gion. It was getting late, and I guess most people were also intimidated by the cold snow, so this area was surprisingly empty. Except somehow it was also filled with Geishas – and it started to snow much harder. I felt like I was in a photography themepark! 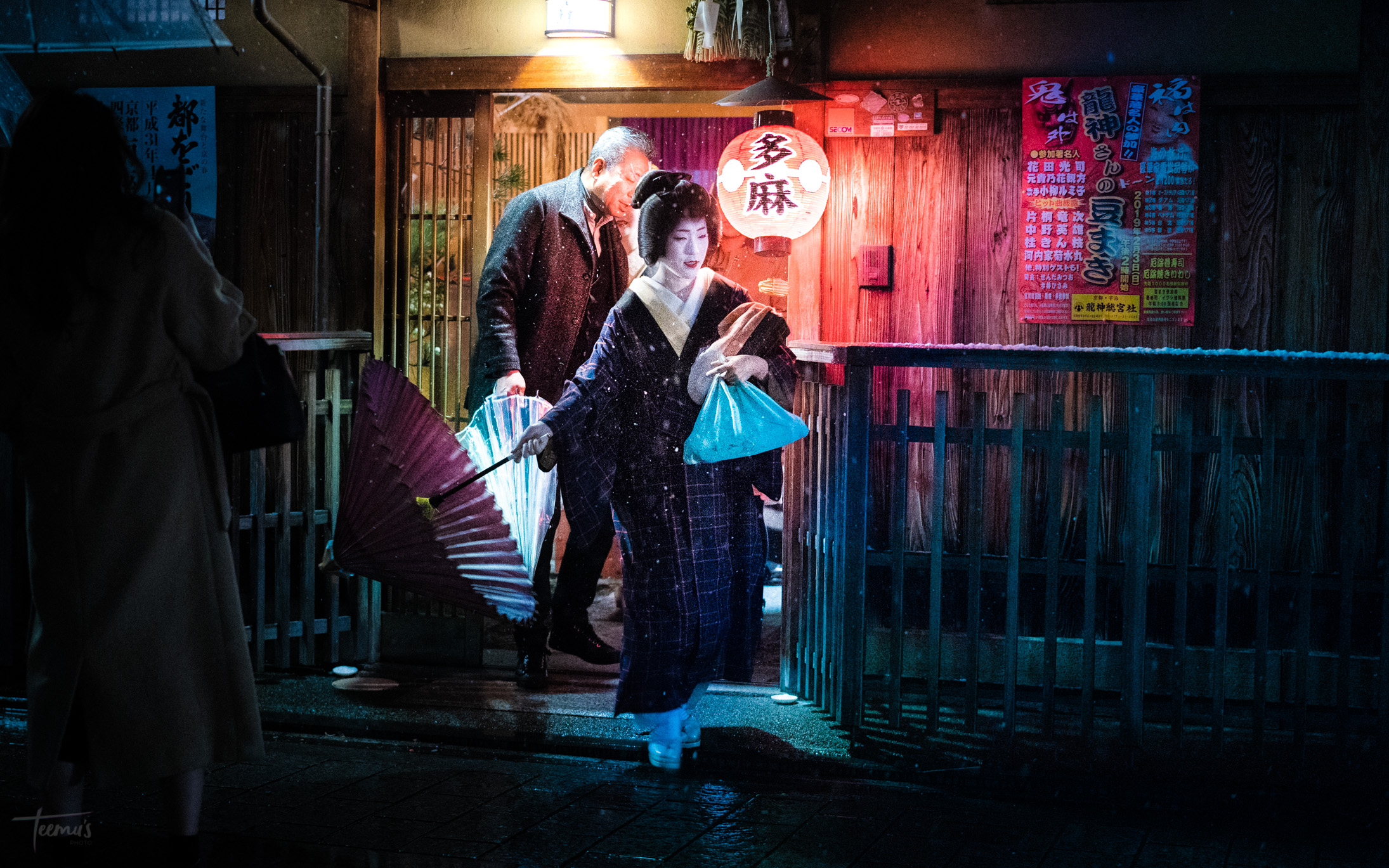 These shops close around 11-12pm, which is when you’ll see a lot of Geishas coming out to wish their customers goodbye. 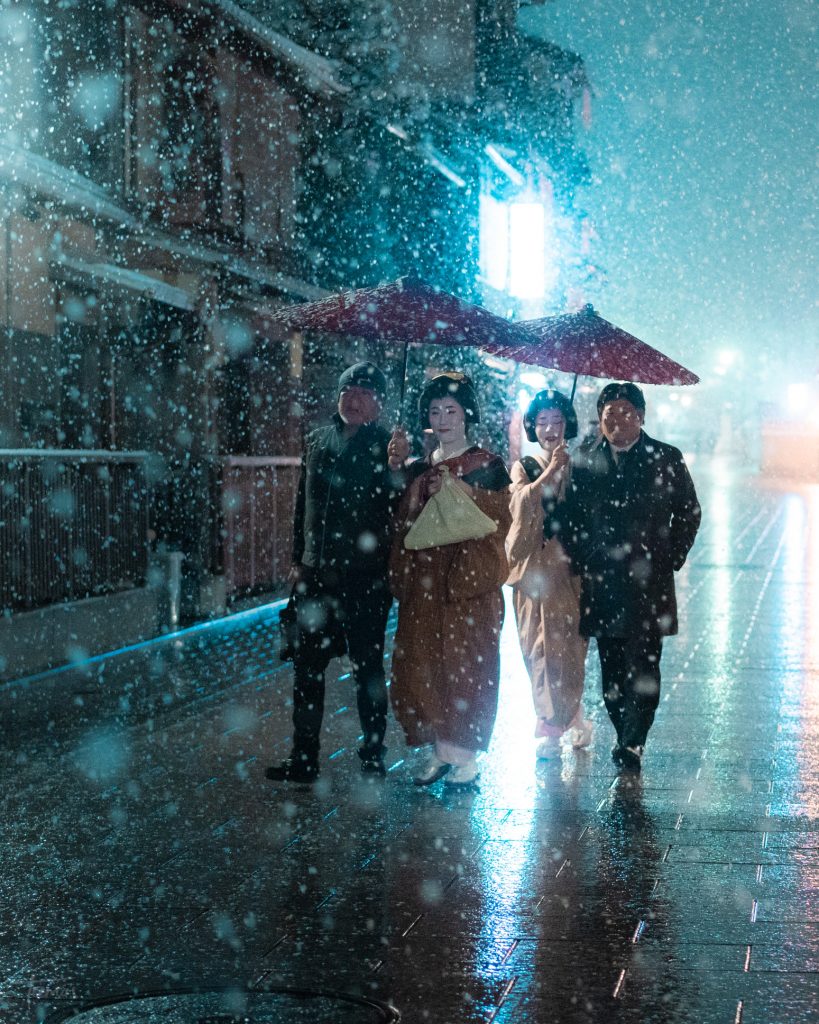 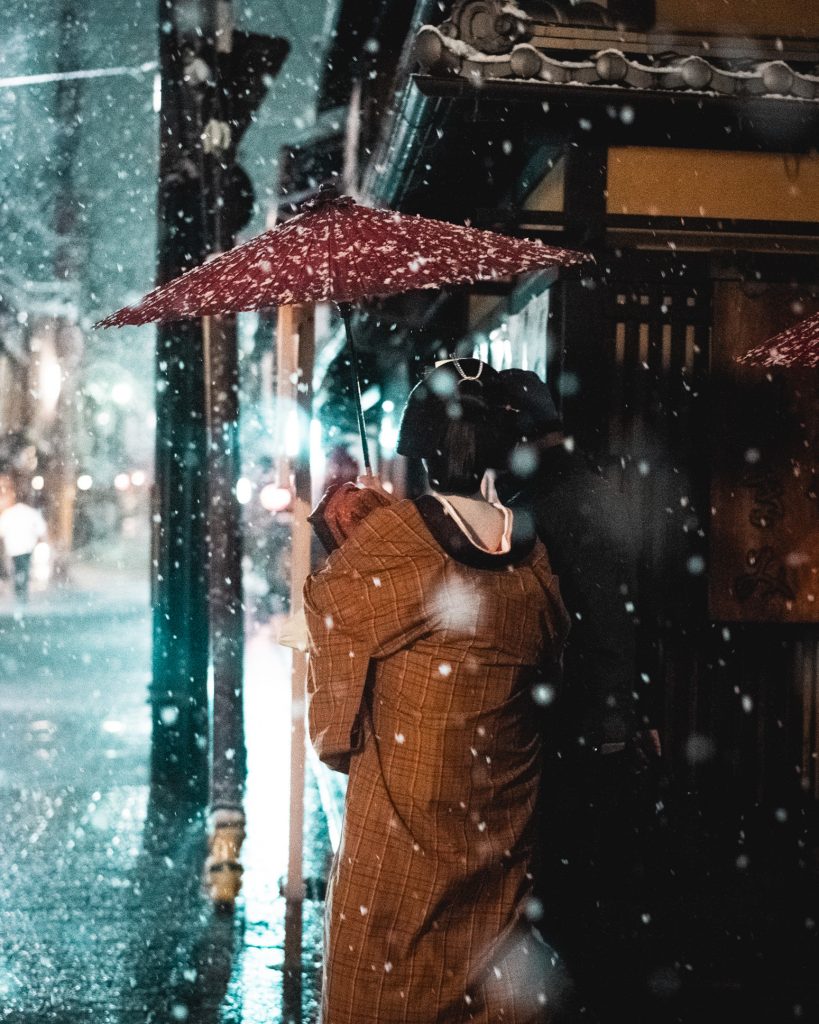 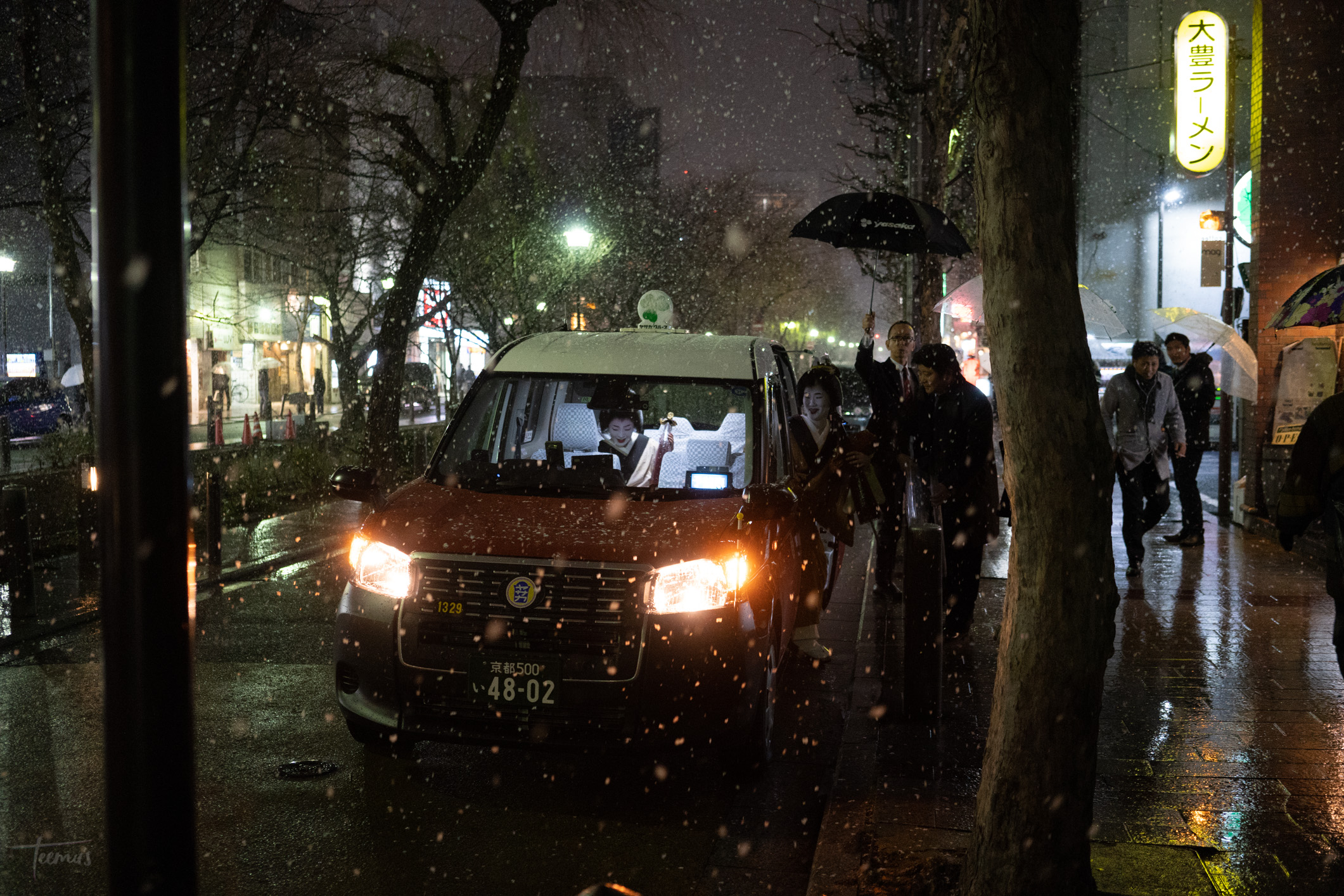 The lack of tourists close to midnight made this night quite unforgettable for me. I felt very lucky, since my 2 previous daytrips to Kyoto had been total failures in terms of photos. This was my last night in Japan, and the snow was the cherry on top. 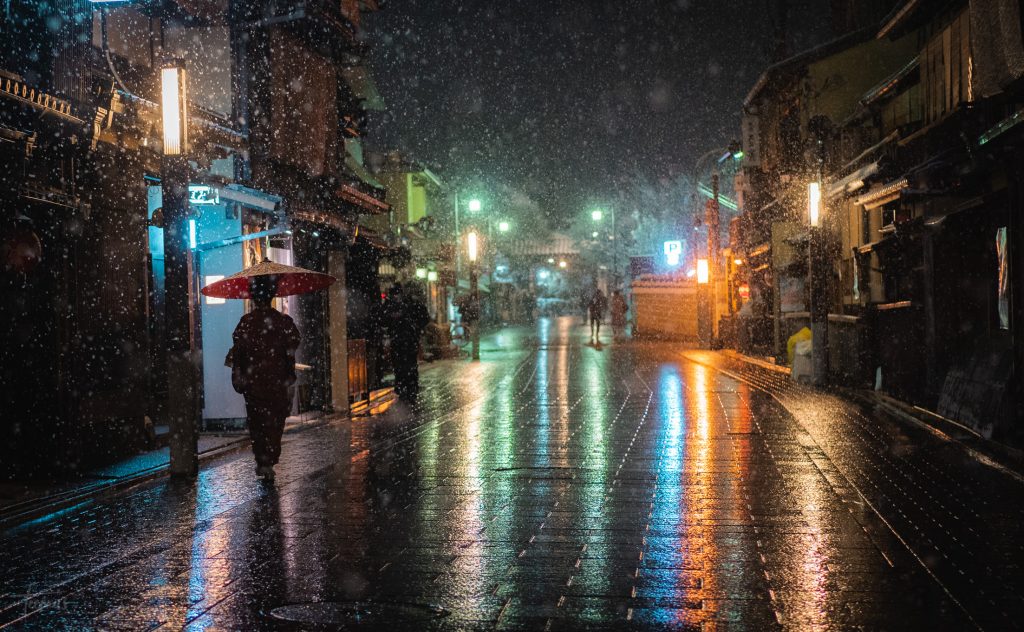 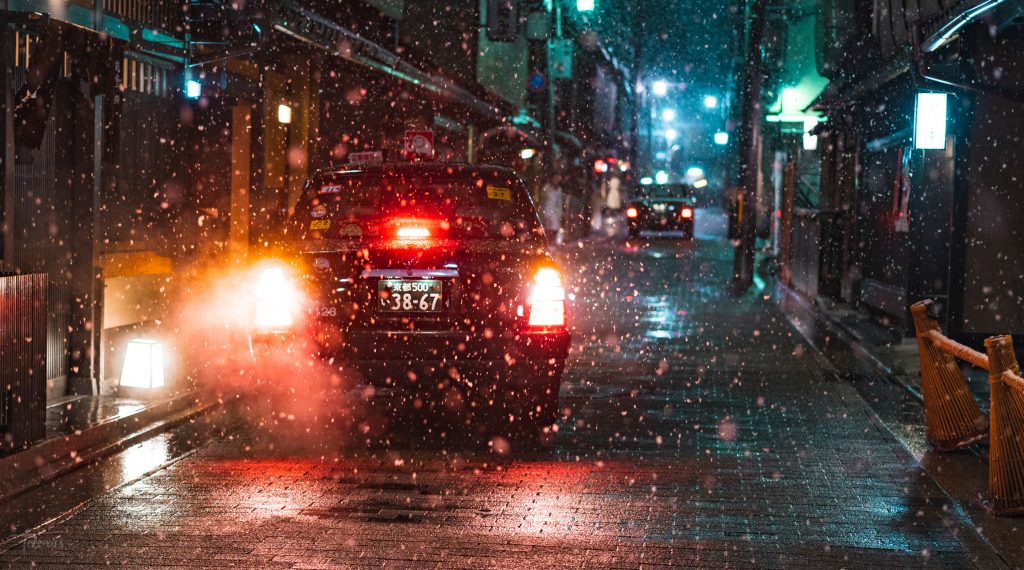 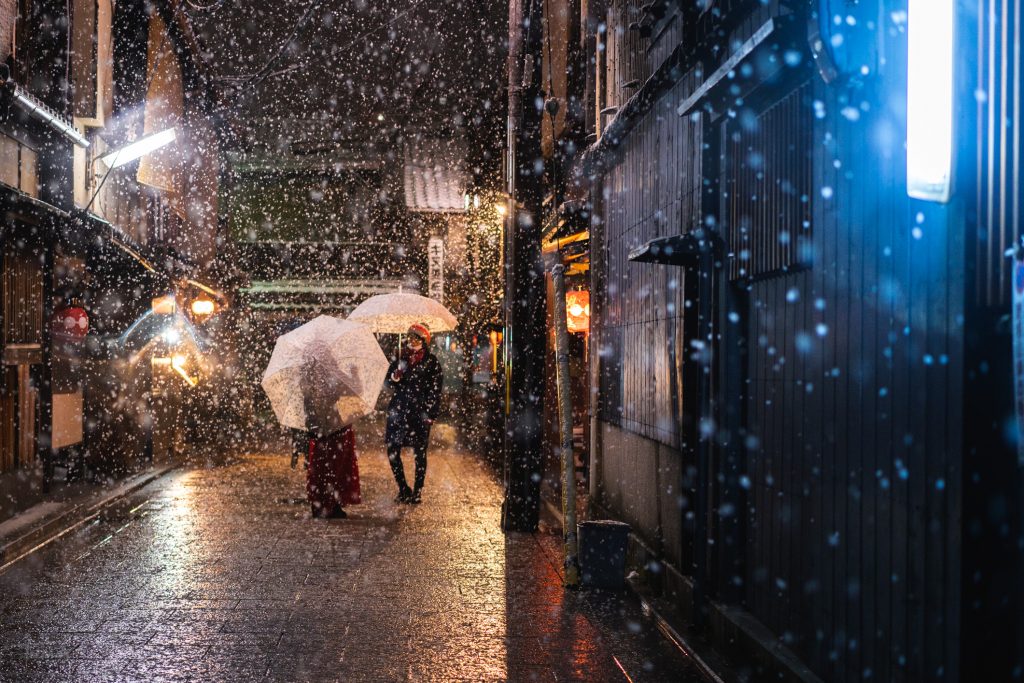 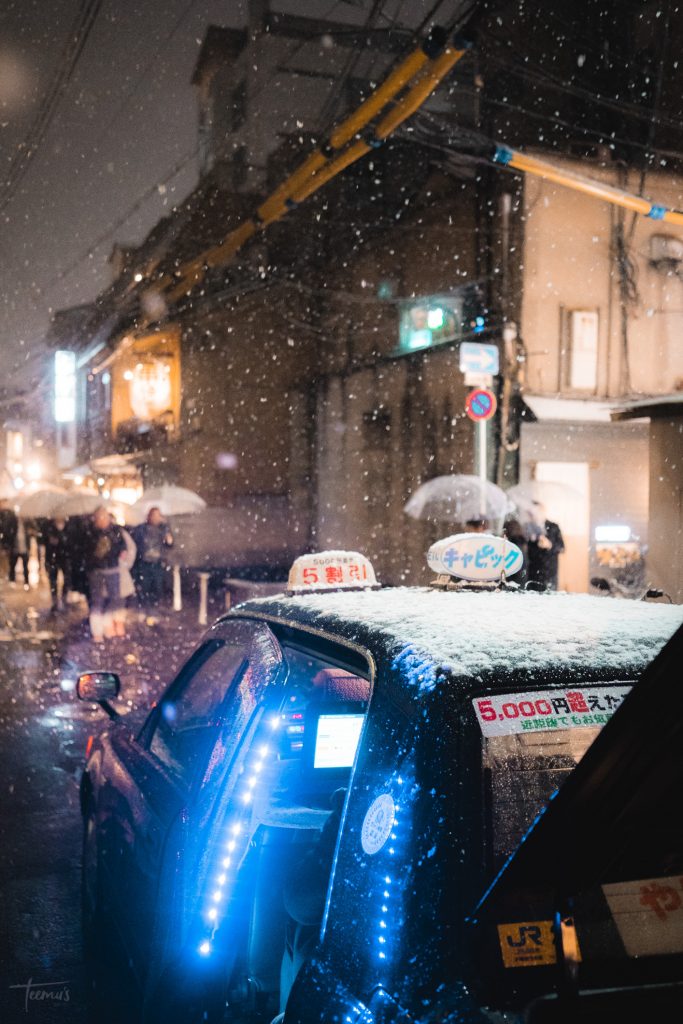 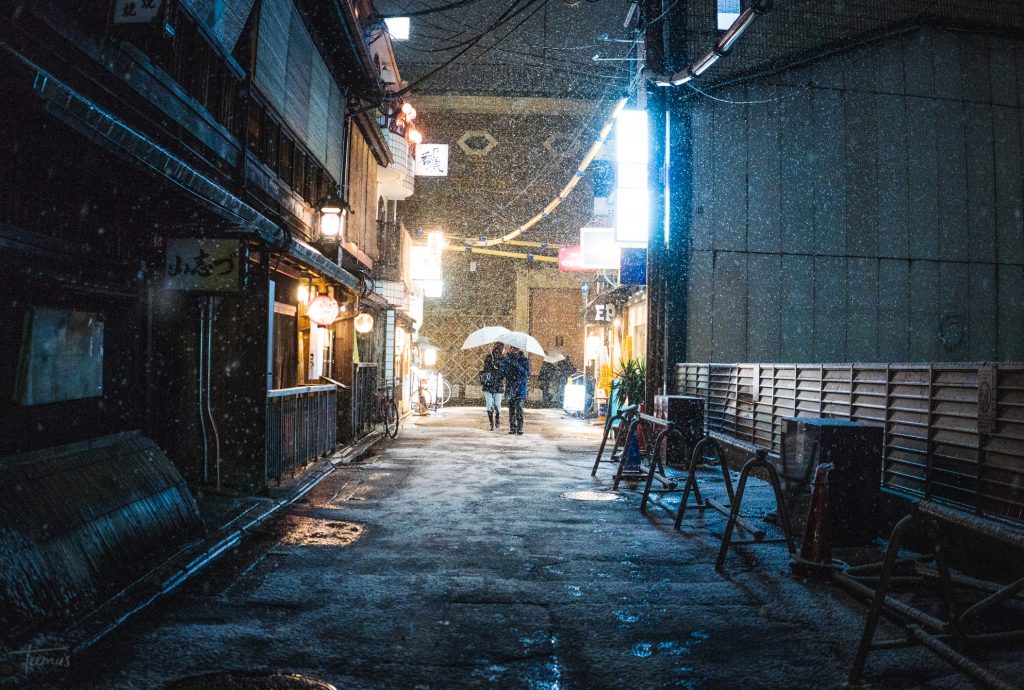 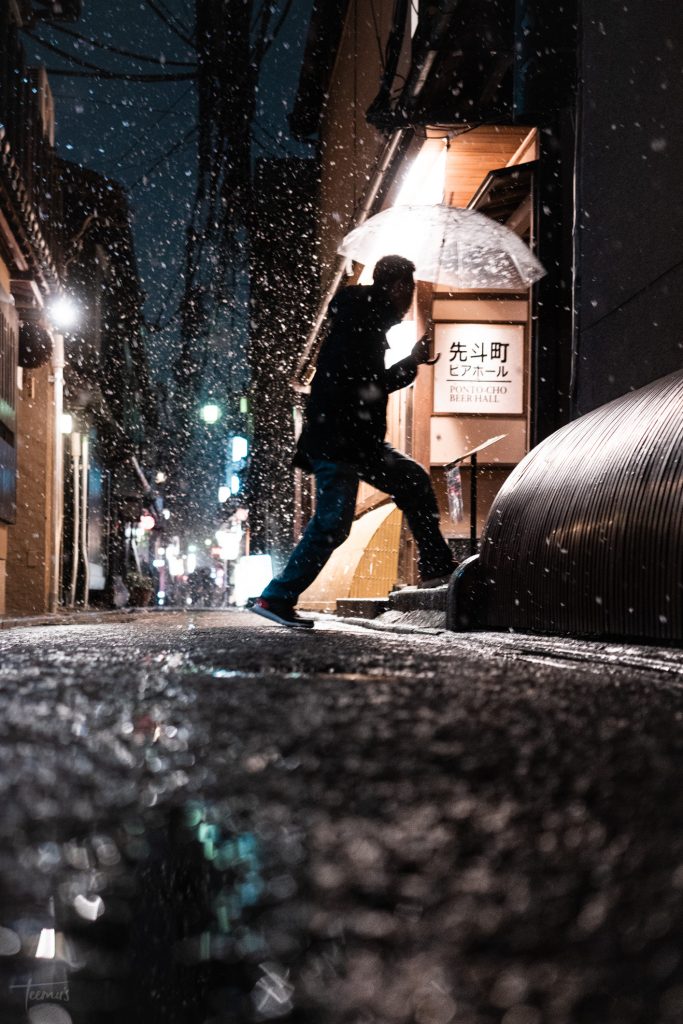 I hope you found this article useful. I had a wonderful time in Kyoto and can recommend it for anyone. The only thing that bothers me is that the subject blinked during the featured image of this post, and I only took that one shot. Half a second later or earlier, and it would have been a much better shot. But that’s how things go sometimes, at least I have another excuse to return to Kyoto again.